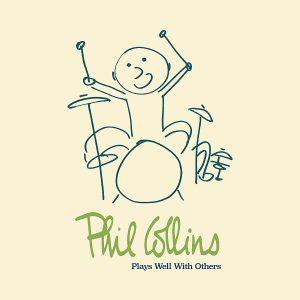 He has been a member one of one of Britain’s most significant rock bands and one of the world’s biggest male solo stars, but Phil Collins was always eager to collaborate with an eclectic range of artists. Spanning drums, vocals, production, songwriting and more, Phil Collins’ many talents have been employed by some of his biggest musical heroes.

Now Phil Collins has compiled a 59-track collection of his collaborative highlight in the shape of ‘Plays Well With Others’. The compilation will be released as a four CD boxset and as a digital download on September 28th.

It’s a box set about the byways of a career that stretches from the ersatz psychedelia of Flaming Youth, through the legendary 70s recordings with Brand X, Brian Eno, Robert Fripp and John Cale and into the superstar era of the 80s, when Collins became the go-to man for legends in need of a fresh lease of life. It extends into the years when he had the status to do whatever he wanted. Form a big band with Quincy Jones conducting and Tony Bennett singing? Why the hell not!

The title comes from a joke gift that happened to contain a profound truth. Chester Thompson, the man who became Genesis’s day-to-day drummer once Collins had become the frontman, arranged to have a special birthday present made for him. It wasn’t a hugely expensive gift – just a T-shirt. On the front Thompson had a slogan printed to reflect his bandmate’s willingness to take his drums along to pretty much any session, his pleasure in working as a producer to help musicians he respected make the records they wanted: “Plays well with others”.

Collins started branching out in the mid-70s to delve into parts of his musical taste that didn’t fit with Genesis’s sound. The band’s producer John Anthony recognised Collins as a musician with the appetite and ability to adapt to different musical environments. “He was producing all kinds of records, and he would use me because he loves good drumming,” remembers Collins. “We used to go into Trident Studios at midnight, just for the fun of playing, and go home at six or seven in the morning. I enjoyed the possibility of just playing and occasionally being paid for it, and occasionally not. It wasn’t for money, it was just for the hell of playing.”

Working on Peter Gabriel’s third solo album resulted in Collins and engineer Hugh Padgham stumbling across the gated reverb drum sound that would dominate 80s pop. That was first heard on Gabriel’s track ‘Intruder’ and later when hit the charts when used in the drum fill in Collins’ signature hit ‘In The Air Tonight’.

In the wake of his solo success with the ‘Face Value’ album, Collins became sought after by already successful artists who needed to do something different, helping Adam Ant, Eric Clapton, Robert Plant and Abba’s Frida into new eras in their careers.

‘Plays Well With Others’ is a set that captures the dizzying variety of one of the most successful stories in music history. That’s what has earned him the respect of so many musicians of so many different genres – the ‘Urban Renewal’ tribute album, represented here by Lil’ Kim, being a classic example.