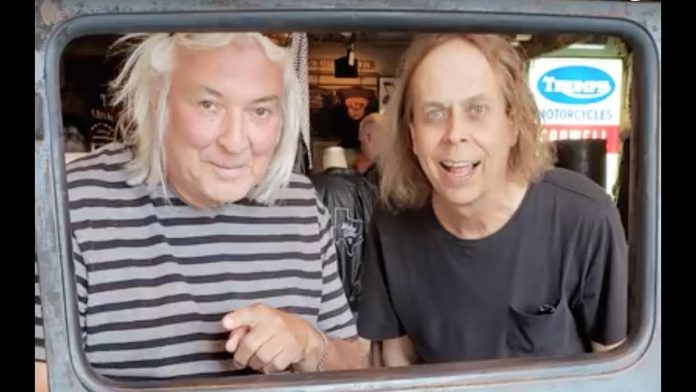 Adding to their fan loving tradition of vlogging their travels, The Kings’ newest video — a behind-the-scenes view of their recent trip to Nashville — reveals exciting new details on what’s coming up for the rockers.

The Kings are set to release “another rocking two-fer” — “Circle of Friends / Man That I Am” — this fall. Founding members Dave Diamond and Mister Zero recently headed to “Music City” to do the final mix on the single with Canadian producer Bob Ezrin, who’s known for his extensive work with Pink Floyd, Peter Gabriel, Phish, Alice Cooper, KISS, Lou Reed, and Deep Purple, among more.

“Dave and I do these little travelogues all the time,” says Z, aka Mister Zero, “They’re fun for us.”

Hailing from Oakville, ON and Vancouver, BC, The Kings are best known for their 1980 smash, “This Beat Goes On / Switchin’ to Glide.” A huge success in all North American major radio markets, the Billboard Hot 100 hit recently surpassed 1.2 million streams on Spotify, and was dubbed by the Toronto Star as the ‘#1 almost official song of Toronto’. Its video is a digital masterpiece, featuring footage from more than 40 sources of live footage that took upwards of 140 hours to edit, it will soon pass 3 million views on YouTube.

The Kings are set to release a new single — another two-song segue called “Circle of Friends / Man That I Am” produced by The Kings and mixed by Bob Ezrin (Alice Cooper, Pink Floyd, Peter Gabriel) — this fall.

The vlog starts off on a rainy, traffic-filled road funnelling into downtown Nashville, as the pair quip about being surrounded by other songwriters from across the continent. What follows are the duo’s time in “Music City”, including eats and beats.

Among the sights? The Kings head to 8th Ave’s Rumble Seat Music, snapping shots of four vintage Les Pauls valued at more than $1 million between them, before battling summer crowds at President Andrew Jackson’s Hermitage and its famous guitar-shaped driveway. There was a jam session at the Cambria Hotel with Joe Denim’s band, and a stop at the Ryman Auditorium.

“So here we are in our ongoing series of two Canadian boys exploring the fast food world of the U.S.,” they narrate as they pulled into Krystal, the second oldest fast food chain in America. Spoiler alert? The gents were not impressed, and recommended Hog Heaven Bar-B-Q or Martin’s Bar-B-Que Joint instead.

“There’s such good food and music in Nashville, and that’s all fun,” says Z on the undisputed world class music mecca. “But we were there to get the mix done this trip, so that was the main focus.

“Working with Bob Ezrin is a serious situation. You better have your A-game ready because he is so professional.”

“When I first heard this thing,” Ezrin shares on hearing the song’s rough mix, “it was reminiscent of work that we’ve done together in the past, and (having) two songs combined again.

“I really liked it. I thought it was really cool, and I thought that it had so much of the same energy and the same spirit of the stuff that we had worked on together before, so I was well into helping (The Kings) to finish it.”

The 13+ hour road trip down was well worth the drive for The Kings to collaborate with Ezrin on “Circle of Friends / Man That I Am.” It’s a familiar and welcome dynamic; Ezrin also produced their first two Elektra Records albums.

“Very happy to be able to mix it down here, (and that they) came down to Nashville to do this thing at my studio,” Ezrin says. “(I) made it sound as good as I think I could. I hope it’s good enough… I think it’s slammin’…!”

Fans already agree and are chomping at the bit. “Can’t wait for the new single,” says Mike Cohn on the video’s comments. “Excited to hear that news,” agrees another, CD, below. “Waiting to hear and buy the new tune!”