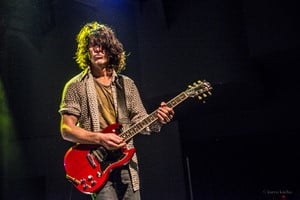 You might have seen ERIC SCHENKMAN before, on stages before thousands of fans throughout the world with the Spin Doctors. You would already know he is one of the band’s not-so-secret weapons — a vital songwriter and a virtuoso guitarist who both crafted the ‘90s band and co-wrote all five of their Top 100 hits. He also worked with Chico Hamilton, Carly Simon, Natalie Merchant, Noel Redding, Phoebe Snow and Corky Laing, among many other notable musicians.

And that is exactly what you hear as well on his self-produced third solo album, WHO SHOT JOHN?, October 26.

WHO SHOT JOHN? showcases the many sides of ERIC SCHENKMAN from raw, rockin’ blues to funk/soul/pop. With its elemental lineup of guitar, bass and drums, and songs that seldom stray beyond three chords it’s radio-friendly and familiar enough to draw listeners in. After that, the complexities reveal themselves.

The proof is in the beats, in the intimacy of those late nights on the stage and through every moment of WHO SHOT JOHN? It’s even expressed in the title track, an old American colloquialism meaning “cut the bullshit, let’s get real.”

Already performing a residency in his current hometown of Toronto every Wednesday at Grossman’s Tavern, he has lined up three shows outside of Toronto to celebrate the release of his album: My Father’s Place in Roslyn, NY on September 27, The Barn in Egremont, MA on September 29 and at the Rockwood Music Hall in New York City on September 30. Tickets are available on SCHENKMAN’s official website. The Spin Doctors are celebrating their 30th anniversary with a special show at the Brooklyn Bowl in Brooklyn, NY on November 8, presented by Relix magazine. More solo shows are currently in the works and will be posted online in the coming weeks.

SCHENKMAN’s unique artistry emerges in the exhilarating anarchy of “Agent Orange.” The sensuous rumba feel of “Fortune Teller.” The rock ’n soul infused love song “Only A Fool.” The Americana-tinged “Lincoln’s Feat.” The steady, pulsing grove of “Locked in the House.” And the hard-hitting rock of “No Pain.” Every track digs in deep and doesn’t let go, thanks to SCHENKMAN’s voice, commanding guitar and powerfully emotional lyrics.

WHO SHOT JOHN? is both classic and immediate. And, as SCHENKMAN would likely admit, it’s overdue. “I’ve been playing the Ontario blues circuit for about a decade,” he explains. “I have this long history as a guitarist in relationship to the blues up here in Canada. And I’ve been writing songs in a couple of different idioms. So WHO SHOT JOHN? comes from a convergence of my three worlds — vocals, guitar and songwriting. It’s about my life. Where I’m at now.”

The new album kind of launched itself, beginning in December 2017, when SCHENKMAN went to visit Van Romaine in Newark. A bona fide groove master, Romaine plays drums with Enrique Iglesias and with the Steve Morse Band. Together they recorded the foundation for about half the songs on WHO SHOT JOHN?

The rest of the guitar/drum basics were nailed when SCHENKMAN asked another longtime pal, North Mississippi All Stars drummer Cody Dickinson, to play electric washboard on the title track. That session led to Dickinson playing drums on the rest of the tracks which were recorded at the Checkerboard Lounge just south of Memphis.

The next step was to invite Canadian blues veteran, Shawn Kellerman who plays with Lucky Peterson, to co-produce and play bass. As the production continued in Kitchener, New York and Los Angeles, it became clear SCHENKMAN accomplished what many have tried: each track crackles with the live energy he has cultivated for the last 30+ years on stage.

SCHENKMAN attributes this both to his choice of songs and to the calibre of his fellow musicians. “All of us are live players. These guys love to play live. You can feel that throughout the album.”