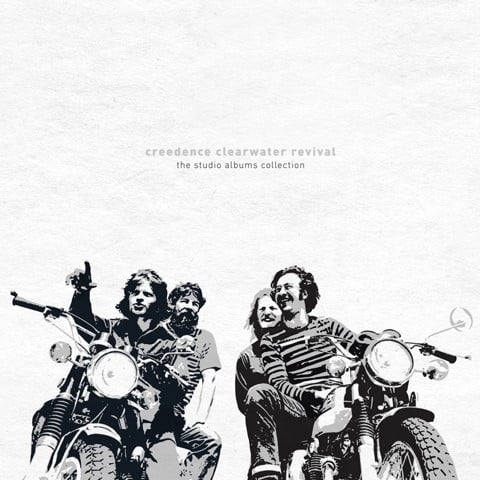 Each album in this collection has been mastered at half-speed at Abbey Road Studios, benefiting from an exacting process that allows for an exceptional level of sonic clarity and punch, bringing these classic recordings a new vibrancy. The 180-gram LPs come housed in handsome tip-on jackets replicating the packaging of the original pressings. Along with the complete studio album collection comes an 80-page book featuring new liner notes from music journalist Roy Trakin, archival photos and reproductions of band ephemera – offering something for both new and the most diehard of Creedence fans.

Using high-res transfers from the original analog tapes, the half-speed mastering process involves playing back audio at half its recorded speed while the cutting lathe is turned at half the desired playback speed. The technique allows more time to cut a micro-precise groove, allowing more accuracy with frequency extremes and dynamic contrasts. Abbey Road Studios’ award-winning engineer Miles Showell explains, “I’ve tried to be as authentic as I could, and just make it sound like music. Not over-hyped, not over-processed. Up until now a lot of processing has been done on these recordings, so my approach was to strip them right back and just expose them for what they are – because what they are is great music.”

Although the band members were together for only four years under the Creedence Clearwater Revival appellation, they managed to accomplish more than many artists do in a lifetime. Powered by John Fogerty’s visceral growl, along with Tom Fogerty, Stu Cook and Doug Clifford’s gritty, in-the-pocket punch, they’ve sold over 30 million records in the U.S. alone, releasing 14 Top 10 hits, six Platinum albums (two of which went to number one) and one Gold album. They also managed to play over 150 tour dates around the world, including a headlining spot at Woodstock.

Over the last 50 years, Creedence Clearwater Revival’s canon has become a part of the Great American Songbook. Songs like “Bad Moon Rising,” “Down on the Corner,” “Fortunate Son,” “Have You Ever Seen the Rain?,” “Proud Mary,” “Born on the Bayou,” “Travelin’ Band” and “Up Around the Bend” have been ingrained into pop culture – not just as rock staples, but as classic standards.

In 1993 Creedence Clearwater Revival were inducted into the Rock and Roll Hall of Fame. During his speech honoring the band, Bruce Springsteen noted, “I stand here tonight still envious of that music’s power and its simplicity. They were hits filled with beauty and poetry and a sense of the darkness of events, of history. An American tradition shot through with pride, fear and paranoia. They rocked and played great together… they weren’t the hippest band in the world, just the best.”

Creedence also had a gift for transforming other musicians’ songs in their own image. Impressive covers of classic tracks from all genres are dotted across their albums; from Screamin’ Jay Hawkins’ “I Put a Spell on You,” Dale Hawkins’ “Susie Q” and Little Richard’s “Good Golly Miss Molly,” to the Leadbelly–popularized, blues-gospel evergreen “Midnight Special” and the Marvin Gaye-popularized Motown hit “I Heard It Through the Grapevine.”

With so many memorable songs that continue to grace our radio waves and television and movie screens, plus lyrics that still resonate today, Creedence Clearwater Revival is, truly, America’s greatest rock ‘n’ roll band. This lovingly remastered and restored Complete Studio Albums (Half-Speed Masters) box set represents a package worthy of the Creedence legacy, marking 50 years since the Fogertys, Clifford and Cook brought us a body of work that has inspired and electrified generations of fans.

About Bayou Country (1969):
Liner notes extract: “Instead of delving into the underground,” Fogerty told Uncut’s Bud Scoppa, “…my Elvis-and-Beatles upbringing came directly into play. And I was able to write songs that would go on Top 40 radio, because that’s what I had wanted to do since I was four. I wanted to make hit singles.”

Track Listing
Side A:
1. Born on the Bayou
2. Bootleg
3. Graveyard Train

About Green River (1969):
Liner notes extract: “The album became the band’s first chart-topper, lodging at #1 on the Billboard 200 for the entire month of October, in between Blind Faith and Abbey Road, fulfilling their ambition to become the American Beatles.”

Track Listing
Side A:
1. Green River
2. Commotion
3. Tombstone Shadow
4. Wrote a Song for Everyone

About Willy and the Poor Boys (1969):
Liner notes extract: “It’s a very powerful anti-war message, but even more so, it’s an anti-class-bias message,” Fogerty told Uncut’s Bud Scoppa in 2006. “When I sing it now, it still has teeth.”

Track Listing
Side A:
1. Down on the Corner
2. It Came Out of the Sky
3. Cotton Fields
4. Poorboy Shuffle
5. Feelin’ Blue

About Cosmo’s Factory (1970):
Liner notes extract: “Cosmo’s Factory represents the apogee of Creedence Clearwater Revival, playing like a greatest hits album despite the fact the songs (and covers) are all appearing on disc for the first time…”

Track Listing
Side A:
1. Ramble Tamble
2. Before You Accuse Me
3. Travelin’ Band
4. Ooby Dooby
5. Lookin’ Out My Back Door
6. Run Through the Jungle

About Pendulum (1970):
Liner notes extract: “With Pendulum, the band decided to experiment in the manner of Sgt. Pepper, without any preconceived ideas, which ran against Fogerty’s notions of organization and control…”

About Mardi Gras (1972):
Liner notes extract: “…the now-threesome went into the studio in the spring of 1971 to record a new single, “Sweet Hitch-Hiker,” with the B-side a song written and sung by Stu Cook, “Door to Door,” an amiable rockabilly number. “Sweet Hitch-Hiker” would be the band’s last Top 10 single, reaching #6 on the Billboard Hot 100. ”

Track Listing
Side A:
1. Lookin’ for a Reason
2. Take It Like a Friend
3. Need Someone to Hold
4. Tearin’ Up the Country
5. Someday Never Comes