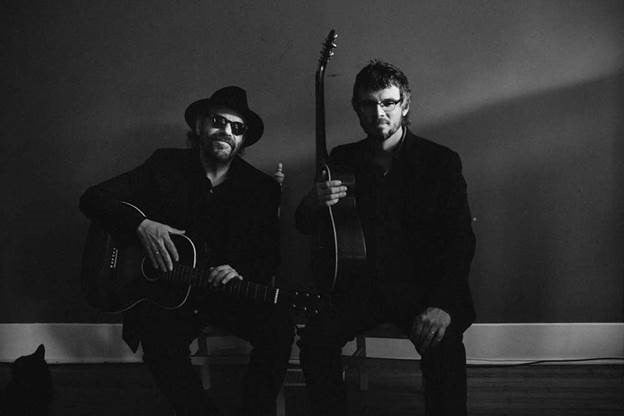 Colin Linden and Luther Dickinson pair their roots guitar talents for Amour, due out February 8 via Stony Plain Records. The album was produced by Linden, recorded at Blackbird Studios in Nashville, and features a backing band dubbed The Tennessee Valentines of Dominic Davis ( bass), Bryan Owings (drum), Fats Kaplin (violin and accordion), and Kevin McKendree (keyboards).

Linden and Dickinson recruited a host of Nashville talent as guest vocalists on the new disc, including the legendary Billy Swan, who sings lead on “Lover Please”, a song he wrote, which was recorded and became a classic hit for Clyde McPhatter, as well as songbirds Rachael Davis and Ruby Amanfu, plus two of Linden’s Nashville TV series buddies – Sam Palladio (“Crazy Arms”) and Jonathan Jackson (“I Forgot to Remember to Forget”).

“These are songs of sentimental, romantic love,” says Colin Linden. “They come from country (“Crazy Arms”), blues (“Honest I Do”), rock ‘n’ roll (“Lover Please”), rhythm and blues (“What Am I Living For”), and folk music (“Careless Love”). I think that is a pretty good read on what Americana really is. ‘Careless Love’ is the ‘ID’ of the record—a traditional song of love, longing and regret. I view the entire album as a soundtrack for romance and romantics everywhere, bound together by melody and atmosphere.”

Amour is the first collaboration between Colin Linden (Blackie and the Rodeo Kings, TV show Nashville) and Luther Dickinson (North Mississippi Allstars, Black Crowes) and consists of classic love songs from the Americana world. Both Linden and Dickinson are true veterans of roots music, having played with and produced some of the biggest names in the business, while displaying the mantle of countless awards and accolades to reflect that.

“Most of these songs I have known my whole life, and they reached me in the same way,” says Linden. “I mentioned the idea of recording them as a collection to my friend Luther Dickinson, who said it was a good idea—and that it would be cool to work on it together. Luther is not only a master musician, but also an artist with a great vision and a soulful, wonderful human being.”

“Colin and I are fellow guitar-slinging, peace-loving, freedom-fighting romantics who jump at any and every opportunity to play guitars together,” adds Luther Dickinson. “Our only problem is not erupting into joyous laughter as the music unfolds. In the spirit of brotherly love and old-school ancient sonic explorations, Colin and I both plugged into a shared guitar amp that you can hear in the middle. Our individual amps are spread out, and though you can hear the different guitars popping thru here and there, it’s hard to tell who is playing what, and that only adds to Colin and my Amour fest.”

“As time and fate would have it, all of the mighty folks who joined us were also moved by these songs,” explains Linden. “Blessed by one of our heroes—and the composer of one of these songs—Billy Swan, we felt like we were on the right road in doing this album. It was a band of angels we were joined by; Luther suggested we call it The Tennessee Valentines, based on the beautiful song and these glorious spirits. But the real story is the love story in the songs.”

Amour is Linden’s second album for the label since Stony Plain re-signed the nine-time JUNO Award-winning singer/guitarist in 2015 and released his acclaimed Rich in Love that same year. Stony Plain was also the home of Colin’s first studio album, The Immortals, in 1986.

Colin Linden continues to be a very much in-demand musician, having played on Gregg Allman’s 2011 Grammy-nominated Low Country Blues, as well as Grammy-winner Rhiannon Giddens’ album, Tomorrow Is My Turn, and Diana Krall’s Glad Rag Doll. He’s also produced 125 albums, was the musical director on the hit TV show, Nashville and toured as guitarist for Bob Dylan, Bruce Cockburn, Emmylou Harris, Robert Plant and, among many others.

In addition, he was the featured guitar player on the PBS-TV special saluting gospel music, In Performance at the White House, backing such stars as Emmylou Harris, Rodney Crowell, Lyle Lovett, and Shirley Caesar. In recent years, he’s also played on the soundtracks for a number of feature films, including Inside Llewyn Davis, The Hunger Games, R.I.P.D. and the acclaimed documentary, A Place at the Table. In 2015 he was the music director for the special tribute to legendary Sun Records founder Sam Phillips at the Country Music Hall of Fame.

A genuine renaissance man of roots music, Colin is also a member of the highly successful trio, Blackie and the Rodeo Kings, who released the highly acclaimed album, Kings & Queens, in 2011, which teamed the band up with such guests as Emmylou Harris, Rosanne Cash, Lucinda Williams, Cassandra Wilson, Patti Scialfa and Holly Cole. That disc was followed by the Kings & Kings album in 2016.