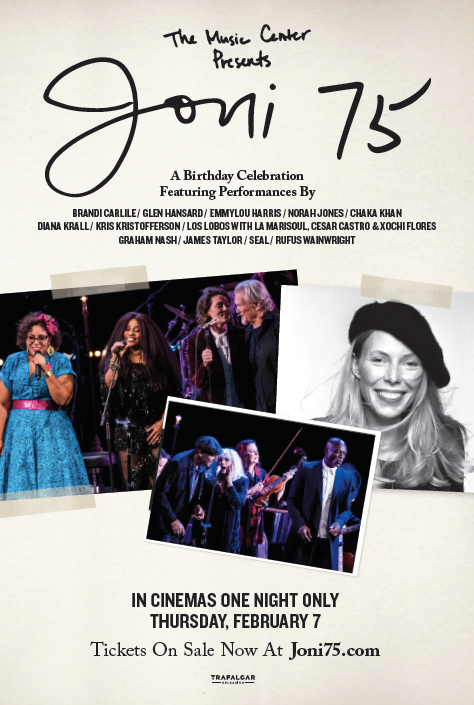 Honouring one of the world’s most revered artists, Joni Mitchell, on her 75th birthday, The Music Center Presents Joni 75: A Birthday Celebration brings an incredible array of singers and musicians to cinemas across the U.S. and Canada for a one-night-only celebration on February 7, 2019 in collaboration with global event cinema distributor Trafalgar Releasing and The Music Center, Los Angeles’s premiere performing arts centre.

Tickets for The Music Center Presents Joni 75: A Birthday Celebration will be on sale beginning today at joni75.com or at participating theatre box offices. The film will be shown in twenty Canadian Cineplex theatres on February 7.

A music icon whose work continues to inspire generations of artists, Mitchell performed on the Dorothy Chandler Pavilion stage in 1972 and 1974, with the Los Angeles Times describing her 1972 concert as “Joni Mitchell in a Giant Living Room”.

With nine Grammy awards to her name and 16 Grammy nominations, Mitchell’s catalogue of music spans more than five decades. In 2017, Mitchell’s 1971 album Blue was named number one on National Public Radio’s list of the 150 greatest albums made by women. Her work has no boundaries and crosses genres from Folk and Pop, to Jazz and World Music. Mitchell is also a prolific painter and was once quoted as saying, “I’m a painter first, and a musician second.” While Mitchell hails from Canada, she has called Los Angeles home for decades.