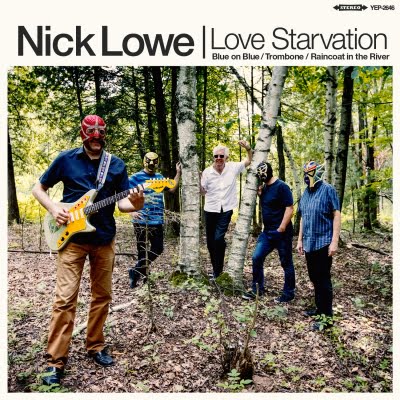 On May 17, Yep Roc Records will release Nick Lowe’s Love Starvation / Trombone, the latest collaboration between the “master songwriter who never takes himself too seriously” (Rolling Stone) and Los Straitjackets, America’s beloved masked men of surf-and-spy guitar instrumentals (who also have new music coming soon). Recorded in Woodstock, New York over a short break from touring, the collection features three new Lowe originals and a cover of the obscure Phil Spector-produced gem “Raincoat In The River.” Lowe’s second consecutive release with Los Straitjackets (after 2018’s Tokyo Bay / Crying Inside) brings the ongoing collaboration to new heights, as he notes “The Straitjackets definitely influenced these new songs. Love Starvation was written very specifically with them in mind.” Love Starvation / Trombone will be released via all digital platforms and as a 12″ featuring unique sequencing on each side and exclusive artwork for each.

Lowe on “Love Starvation”: “It has a kind of Ritchie Valens feel to it that I thought might suit Los Straitjackets. It’s funny, that song could’ve been a Rockpile song. But in a way, I don’t think I was good enough to write a song like that back then. It sounds like old stuff, but I’m just better at doing it now.”

Love Starvation / Trombone comes at an exciting time for Lowe, who was just the subject of a career-spanning profile in the December 2018 issue of Rolling Stone magazine. The new release follows last year’s collaboration with Los Straitjackets (and Lowe’s first new music in five years) Tokyo Bay / Crying Inside. The group brought single “Tokyo Bay” to CONAN for a special performance during the show’s final week of music bookings, and the “gracefully raucous” (The Ringer) release led NPR Music to declare “The Jesus of Cool rocks again” while still “maintaining his sophisticated pop craft” according to Billboard.

To celebrate Love Starvation / Trombone, the latest incarnation of Nick Lowe’s Quality Rock & Roll Revue Starring Los Straitjackets will come to the United States in April before extensive UK dates in the summer. A full list is below – Lowe and Los Straitjackets’ Yep Roc Records labelmate Dawn Landes will support on most of the US shows.