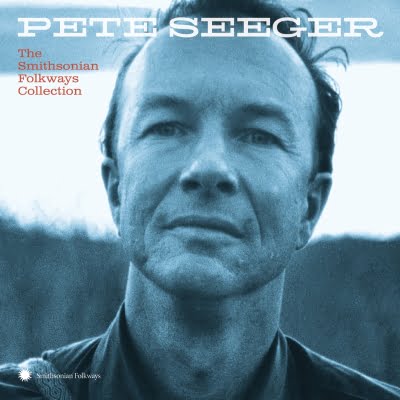 Smithsonian Folkways is proud to announce the upcoming release of Pete Seeger: The Smithsonian Folkways Collection, a career-spanning anthology of one of America’s most quintessential, celebrated, and influential musicians. Featuring classic recordings, 20 previously unreleased tracks, historic live performances, and special collaborations, this set encompasses over 60 years of Pete’s Folkways catalog, including 6 CDs and a 200-page extensively annotated and illustrated 12 x 12” hardbound book. The collection will be available May 3rd, on what would have been Pete Seeger’s 100th birthday. Smithsonian Folkways will be organizing and sponsoring Pete Seeger centennial events around the country throughout 2019, which will be announced soon.

Seeger collaborated with and amplified the voices of artists of color, working people, and impoverished Southern communities, voices which would not have otherwise reached a mass American audience in the early years of his career. His political activism, both through and outside of music, positioned him as a trailblazer, a guiding light for subsequent generations of individuals fighting for their beliefs through art. Though he faced career setbacks, he remained a vital force in folk music and activism for many decades until his death in 2014. During tumultuous and volatile times, through many human rights and environmental struggles, Seeger chose a life of principle and bravery. With his wife, Toshi, he forged a radical path long before independent art was ever considered a career option by most.

Pete Seeger: The Smithsonian Folkways Collection was produced by Jeff Place and Robert Santelli, the same team who produced the acclaimed box sets Woody at 100 and Lead Belly: The Smithsonian Folkways Collection, rounding out a trilogy commemorating three of Folkways’ most iconic recording artists. Featuring photos and stories from all eras of Seeger’s life, from his first recording sessions with Folkways founder Moses Asch to performing at Barack Obama’s presidential inauguration, the set contextualizes the songs and provides valuable insight into the personality that created this classic music.

Seeger’s most iconic songs included helped to define a generation and have become unquestionable standards in today’s folk landscape. “If I Had A Hammer” became one of the most recognizable songs of resistance of the mid-20th century. Co-written by Seeger and his longtime collaborator Lee Hays, he originally performed the song with The Weavers, often at political rallies, and it remained a staple in his live performances. It is a testament to Seeger’s foundational influence that this song was performed by Peter, Paul and Mary alongside Dr. Martin Luther King at the 1963 March on Washington. The Smithsonian Folkways Collection includes many other recordings of the political anthems that came to define his legacy, including earlier labor songs “UAW-CIO”, as well as “Black and White”, which highlights the landmark civil rights Supreme Court case Brown v. The Board of Education, and the collection’s closing number “One Grain of Sand”, a meditation on the idea that millions of small actions can add up to great change.

Seeger’s dedication to international folk song is also demonstrated in the collection. From the Israeli “Tzena, Tzena, Tzena” to several songs from the South African movement against apartheid, global songs, many of which were collected during Seeger’s time in the military, are interspersed here amongst his many labor anthems. Seeger was also passionate about African American folk music, and the collection includes a version of “Kumbaya,” the seminal black spiritual, sung by Seeger and Piedmont blues musician Sonny Terry at Carnegie Hall, as well as other songs with roots in the African American community such as “Didn’t Old John Cross the Water” and “Michael, Row the Boat Ashore.” Seeger’s embrace of African American music and performers was radical during this time and a testament to the forward thinking, intersectional nature of his music and philosophy.

The American musical cannon was profoundly influenced by Seeger’s expansive career. He brought countless songs now considered to be folk standards to the forefront of American musical culture, as demonstrated by this collections inclusion of “Barbara Allen”, later recorded by the Everly Brothers, Bob Dylan, as well as “Kisses Sweeter Than Wine”, which was covered by both Jimmie Rodgers and Bonnie Raitt. Over the past half century his songs have also been performed by Bruce Springsteen, Jackson Browne, The Byrds, and many other giants of popular music.