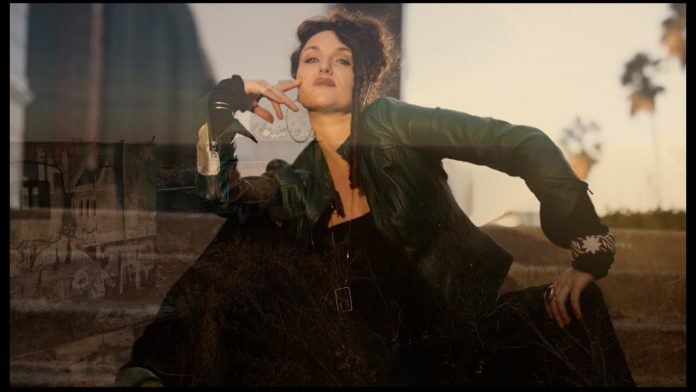 “Musically, it’s an arrival for me,” she shares. “It’s the first song I’ve recorded that authentically brings together a jazzy, hip hop groove with klezmer horns in the way I’ve been envisioning for a while.”

The lyrics on “YOU GOT TO GO” swirl strong around themes of human relationships tarnished by the demands of capitalism, and how the practice often corrupts integrity — even if unintentionally. It falls in line with Idan’s passionate talking points for her forthcoming LP itself: patriarchy, power and love.

“It’s my quiet roar of frustration,” says Idan. “That feeling of being manipulated… The holistic hippie culture I was raised in being appropriated for the benefit of wealthy people displacing poorer communities through gentrification…”

The track was crafted between Idan’s multitude of home bases — Los Angeles, New York, and Berlin. It was within this dynamic spread of location and sound that the artist could fully encapsulate her vision; incorporating klezmer sounds as a nod to her eastern European Jewish roots has long been a critical goal and artistic pull for Idan. “The Black American music canon is how I’m most trained and heavily influenced,” she shares, “and bringing together both traditions has been a mission and logistical struggle. The communities rarely interact, and traditional klezmer players are hard to find in Los Angeles.

“There’s an openness to trying new things in Berlin. There’s a growing interest in live band hip hop and a revival of klezmer music. When I started spending more time in Germany, it seemed perfect to record this song there.”

Perfect was an understatement: “Sy Anon sings background, and says ‘it’s about the man’, but the irony is I wrote it in response to a woman… Noize Fabrik opened their recording studio doors to me with enthusiasm, and Andy Shlegel has been superb to work with as a mixing engineer. I met The SWAG band at their weekly hip hop jam and asked them to record. Chriz Key and Sugbear Narin brought new and delicious colours to my arrangement, and Christian Dawid from Klezmer Sessions Neukölln delighted my angsty Jewish melancholia with his lilting clarinet.”

“YOU GOT TO GO” is the second single available in advance of Idan’s LP, BREAKING SHADOWS — set for release later this year.

“It’s about a woman’s struggle living inside a toxic patriarchy, and about loving sensitive men dealing with their experiences of patriarchy,” she previews. “It’s about the power of love, and the love of power, and about the corruption of love in order to gain and maintain power.

“The music is a blend of both my influences and my ancestors,” she continues, hinting towards the album’s richly woven sonic tapestry and its expression of her multicultural urban identity and cultural activism. “It’s a blend of jazz-soul with a little hip hop vibe, a little Caribbean, Latin American vibe, and then, again, pulling from my ancestral eastern European Jewish roots.

“This song fell out of me one morning in a river of melancholia and questions,” she continues, speaking intimately on the LP’s first single, “DARKNESS.” “It’s a prayer to a higher power — a female consciousness — to guide me on my path as a sensitive human in a turbulent world.”

Having grown up touring as a singer and dancer in a world folk ensemble in New York, she honed her skills as a spoken word poet at The Nuyorican Poets Cafe, has been featured on Artson’s award winning 2018 album Brave Star, MC Dumi RIGHT’s Doing It The Right Way, and DJ Haj i Ji’s EP Reports of My Demise. Idan has shared the stage with legends and mentors Lee “Scratch” Perry, Pete Seeger and Yusef Lateef as well as recordings with Marcia Griffiths and Caron Wheeler on Vienna-based Dubblestandart’s album Woman In Dub.

Sariyah Idan has previously released an EP — Deeper Than Skin — and mixtape — Not Afraid. Her debut LP BREAKING SHADOWS is set for release in 2019.