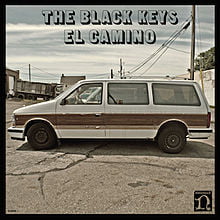 The Black Keyes’ El Camino cover art depicts a minivan similar to one the group toured in early in their career, but in an inside joke, they named the record after the El Camino muscle car. A faux newspaper advertisement and parody car commercial playing on this joke were used to promote the record prior to release.

This commercial, however is real. Unlike a pickup truck, the El Camino was adapted from a two-door station wagon platform that integrated the cab and cargo bed into the body.