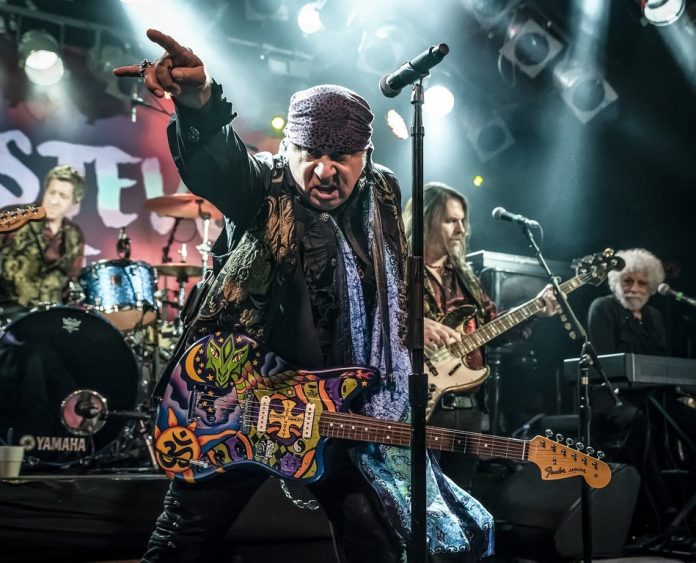 Little Steven and the Disciples of Soul have released a new song, “A World Of Our Own,” from their forthcoming album Summer Of Sorcery due May 3 on Wicked Cool/UMe. The soulful, euphoric track, which premiered via Billboard yesterday who described it as having “a shimmering Phil Spector quality,” conjures up visions of young love, summer nights and a simpler era when Girl Groups dominated the airwaves. “Growing up, The Shirelles, The Chiffons, The Ronettes, The Crystals and The Shangri-Las were really important to me,” says Little Steven aka Steven Van Zandt. “This song is my take on the type of song I might have written for a Girl Group like one of those fantastic acts back in the day.”

Little Steven and the Disciples of Soul have just touched down in Australia for a run of shows that will kick off this Saturday, April 13 in Perth. The 15-piece band will perform a pair of hugely anticipated performances at the 30th anniversary Byron Bay Bluesfest in Byron Bay (April 18 and 20). They will wrap the tour in Auckland, New Zealand on April 27. The band will then head home to the U.S. to celebrate Summer Of Sorcery with special record release shows at The Saban in Los Angeles on May 4 and at the Paramount Theatre in Asbury Park, N.J. on May 8. A wide-ranging world tour will follow, beginning May 16 at Liverpool, UK’s 02 Academy and then making headline stops across the United Kingdom, Germany, Denmark, Sweden, Norway, Belgium, the Netherlands, Switzerland, Italy and Spain.

The first leg of the North American tour will begin July 2 at the London Music Hall in Ontario, Canada and take Van Zandt and band all across Canada and the Eastern U.S., culminating at Outlaw Jam in Annapolis, Md. Each show on the American tour will benefit Van Zandt’s TeachRock education initiative and offer an introduction to the TeachRock.org curriculum. Before the show, the TeachRock staff will host free professional development workshops designed to engage educators with techniques and content through which they can comfortably use music to inspire students, even if they’ve never touched an instrument. The free, multimedia K-12 interdisciplinary curriculum meets prevailing standards in English Language Arts, Social Studies/History, the Fine and Performing Arts, and also includes STEAM and advisory material suitable for K-12 teachers of all disciplines, interdisciplinary best practices, and group activities.

Summer Of Sorcery – which arrives just two years after Little Steven’s acclaimed 2017’s solo return, Soulfire, and its 2018 live follow-up, Soulfire Live! – was written, arranged, and produced by Van Zandt at his own Renegade Studios in New York City; the album was co-produced and recorded by GRAMMY Award-winner Geoff Sanoff and co-produced by Disciples of Soul musical director and guitarist Marc Ribler. Summer Of Sorcery was mixed and mastered respectively by Van Zandt’s career-long collaborators and friends Bob Clearmountain (Rolling Stones, David Bowie, The Who, Bryan Adams), and Bob Ludwig (Led Zeppelin, Nirvana, The Band, Sly and the Family Stone). The album – which features an exclusive introduction written by Van Zandt – is adorned with Frank Frazetta-inspired cover art by Van Zandt’s longtime art director, Louis Arzonico.

“My first five albums in the ’80s were both very personal, and very political,” explains Van Zandt. “I wanted the new material to be more fictionalized. The way records were when I grew up. Before it was an artform. The concept was capturing and communicating that first rush of summer. The electricity of that feeling of unlimited possibilities. Of falling in love with the world for the first time. Obviously, there are occasional personal references, and a bit of what’s going on socially scattered throughout, but I achieved what I set out to do. I created a collection of fictional movies scenes that feel like summer. I’m quite proud of it.”

LITTLE STEVEN AND THE DISCIPLES OF SOUL ON TOUR 2019