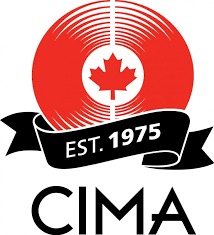 The Canadian Independent Music Association is proud to announce the recipients and nominees for the fifth annual CIMA Celebration & Awards Gala. This year’s honourees will be recognized for their incredible contributions to independent music during the gala on June 10, 2019 at Lithuanian House Banquet Halls in Toronto, ON. The event will be hosted by CBC Music radio personality, Angeline Tetteh-Wayoe.

Established in 1975, CIMA is the not-for-profit national trade association representing the English-language, Canadian-owned sector of the music industry. CIMA represents a diverse membership consisting of Canadian-owned companies and their ambassadors, all of whom are involved in every aspect of the music, sound recording and music-related industries. CIMA’s mandate is to develop and advocate policies and services that serve to support a strong and economically stable Canadian independent music and sound recording industry, ensuring the long-term development of the sector and to raise the profile of Canadian independent music both in Canada and around the world.

Tickets are on sale now for $150 each, and include the reception, awards dinner, and after party where guests will be treated to an evening of music, celebration, gourmet food, and drinks aplenty! Tickets can be purchased at: https://2019cimagala.eventbrite.ca.

“We are thrilled to once again celebrate those who create, support and strengthen Canadian independent music,” said Stuart Johnston, President, CIMA. “We are so pleased to recognize this year’s honourees for their outstanding dedication to our Canadian music industry.”

Our 2019 Marketing Award Nominees are: Presented by Select Distribution

The Marketing Award winner will be announced at the 2019 CIMA Celebration & Awards Gala on June 10 with Special Guest Performances by Joel Plaskett, Kevin Drew & Brendan Canning (of Broken Social Scene), Moscow Apartment, The Sorority and Whitehorse.