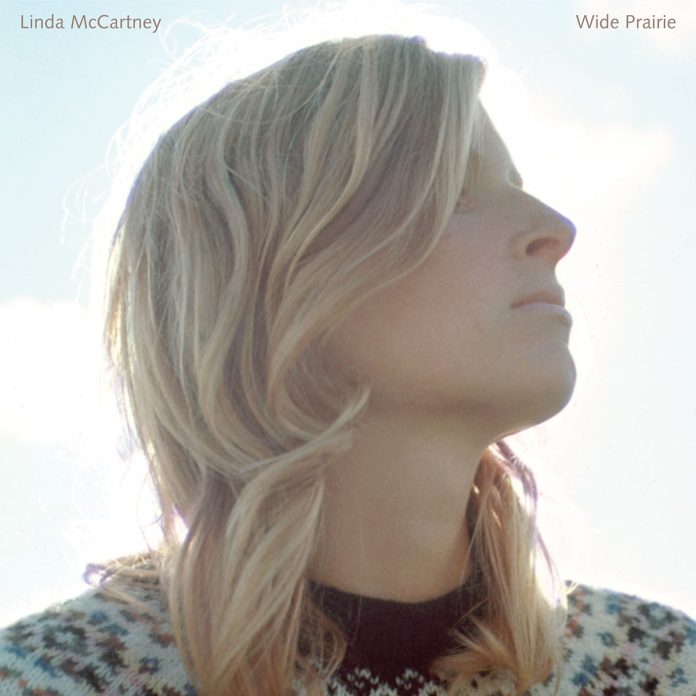 Wide Prairie, a posthumous 1998 compilation of Linda McCartney recordings spanning the early 1970s through the late 1990s, will be re-released August 2 via MPL / Capitol / UMe.

The only album to be released solely under Linda’s name, Wide Prairie features Linda on vocals and various instruments on songs she wrote or co-composed and recorded with Wings between 1972 and 1980, the single-only ‘Seaside Woman’ / ‘B-Side to Seaside’ released under the pseudonym of Suzy and the Red Stripes, cover versions of classics by the McGuire Sisters, The Coasters and more, and solo work from the ‘80s and ‘90s including her final recording, ‘The Light Comes from Within’ (co-authored by and featuring Paul McCartney, as well as their son James on electric and acoustic guitar).

Two tracks from the release also highlight Linda’s interest in other art forms outside photography and music. ‘Seaside Woman’ featured in the Palme d’Or winning short film by Oscar Grillo at the Cannes Film Festival in 1980. ‘Oriental Night Fish’ also appeared in a short film of the same title created by Linda and Ian Emes.

Wide Prairie will be released August 2nd on limited edition white/blue colored vinyl and classic black vinyl, digitally and on streaming services. The reissue will mark the first time the album has been available on vinyl since its original 1998 release. The album is available for pre-order now.

To celebrate the first UK showing of the Linda McCartney Retrospective, the limited edition colour vinyl LP pressing of Wide Prairie will be available exclusively for one month prior to the album’s general release at Kelvingrove Art Gallery and Museum in Glasgow from the exhibition’s July 5th opening. The major retrospective of Linda’s photography has been curated by Paul, Mary and Stella McCartney. [More information here: https://www.glasgowlife.org.uk/event/1/linda-mccartney-retrospective]

The full track listing for Wide Prairie are as follows. All songs written by Linda McCartney, except where otherwise indicated: