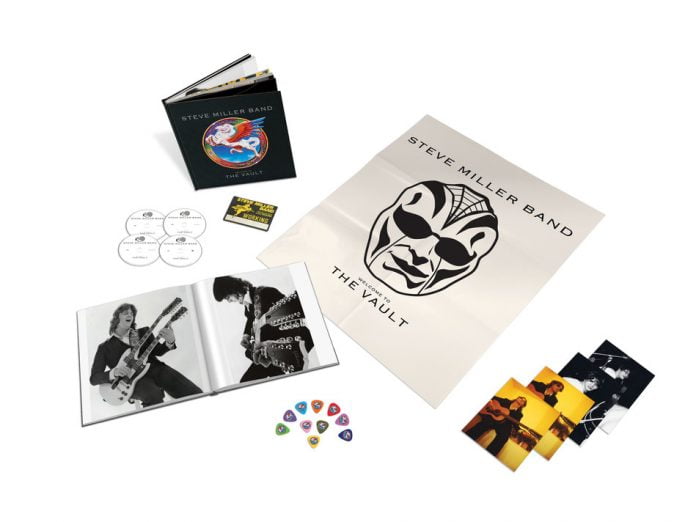 WELCOME TO THE VAULT is heralded by today’s premiere of “Rock’n Me” (Alternate Version 1), a different take of the classic #1 hit from 1976.

Fricke writes in his liner notes: “Miller wrote ‘Rock’n Me’ with a different setting in mind. He was still without a working band when the English prog-rock giants Pink Floyd asked him to be their special guest at a massive festival on July 5th, 1975 at Knebworth, England. Miller called Lonnie Turner, Les Dudek – a guitarist in Boz Scaggs’ band – and Doug Clifford, the former drummer in Creedence Clearwater Revival. They rehearsed for a single afternoon, working up a half-dozen R&B standards, a couple of Miller hits and a surprising debut, ‘The Window,’ an early version of which appears on WELCOME TO THE VAULT.

“‘But I knew what was going to happen,’ Miller says. The Floyd ‘were gonna put me on at sunset. There won’t be any lights, and I’m just chum. I needed a song to rock the whole joint.’ Miller showed ‘Rock’n Me’ to the band at practice; they played it live for the first time in front of 100,000 people at Knebworth. ‘We closed with it, and it killed them,’ Miller says proudly.”

WELCOME TO THE VAULT opens in 1969 with the Steve Miller Band covering Little Walter’s “Blues With a Feeling” at the Fillmore West in San Francisco, a previously unreleased 10-minute blowout unlike anything else in Miller’s official studio or live catalog. Faithful to the form yet undeniably visionary, the track instantly sets the pace for what is to come. A turbulent “Super Shuffle” recorded live at Steve Miller Band’s breakthrough appearance at 1967’s Monterey Pop Festival, is fast followed by such previously unreleased revelations as an early version of “Going to Mexico” (originally found on 1970’s NUMBER 5) as well as solo acoustic takes on BRAVE NEW WORLD’s “Kow Kow Calculator” and “Seasons,” recorded on the road in 1973.

The evolutionary sessions for 1976’s FLY LIKE AN EAGLE and 1977’s BOOK OF DREAMS – Steve Miller Band’s “multi-platinum fusions of crisp funk and blues undercurrents, progressive-rock electronics and hit-single pith,” according to Fricke – are captured via alternate takes including a striking view of “Fly Like an Eagle” as a 12-minute work-in-progress suite. WELCOME TO THE VAULT further includes a number of alternate version of iconic Steve Miller Band tracks mostly recorded prior to their commercial releases, and a recent big band reinterpretation of “Take the Money and Run” featuring fellow Texas guitar hero Jimmie Vaughan recorded live at New York’s Jazz at Lincoln Center, where Miller is involved as a performer, educator and curator focusing on blues music.

Indeed, the blues in all its forms can be heard throughout WELCOME TO THE VAULT, in versions of songs of Willie Dixon, Robert Johnson and Otis Rush, as well as country and R&B variations like Roy Acuff’s “Freight Train Blues” and Mickey and Sylvia’s classic “Love Is Strange.” Miller’s own personal links to the lineage and history of guitar music are also prominently featured, including a 1990 version of Jimmy Reed’s “I Wanna Be Loved,” recorded with his close musical friend and godfather, Les Paul, during the electric guitar pioneer’s famed Monday night residency at New York City’s Fat Tuesday’s.

WELCOME TO THE VAULT closes with a pair of landmark tracks also released here for the first time that include Texas blues guitar legend T-Bone Walker performing his 1952 hit, “Lollie Lou,” on a tape made the year before in the Miller Family living room by Steve’s father George, a passionate jazz and blues fan and home recording enthusiast. The collection finishes more than 60 years later with Miller himself performing “Lollie Lou” at “T-Bone Walker: A Bridge from Blues to Jazz,” the December 2016 tribute concert curated by Miller at Jazz at Lincoln Center.

As if all that weren’t enough, the WELCOME TO THE VAULT DVD features 21 incredible live performances, including rare footage from 1967’s Monterey Pop Festival, a Dutch TV filmed performance of the Fillmore West from 1970, a 43-minute September 1973 concert at New York’s Palace Theater broadcast on Don Kirshner’s Rock Concert (unseen since the ’70s), an ABC In Concert performance with James Cotton (1974), a performance of “Abracadabra” from Michigan’s Pine Knob from that album tour in 1982, and selections from Austin City Limits (2011), as well as Miller’s intimate 1990 performance with Les Paul at New York City’s Fat Tuesday’s.

Long regarded as one of rock’s most dynamic and creative live acts, the Steve Miller Band will team up with Marty Stuart and His Fabulous Superlatives for a 36-city U.S. tour. Miller calls it “An Amazing Evening of Original American Music – Classic Rock Meets Classic Country.” The trek gets underway June 13 at Des Moines, Iowa’s Wells Fargo Arena and then travels through a two-night finale at Woodinville, WA’s Chateau Ste. Michelle on August 30 and 31.

In addition, Miller will continue his exploration of the blues at New York’s Jazz at Lincoln Center with “Cannonball Adderley and The Blues,” a spirited celebration of saxophone legend Cannonball Adderley. Set for Saturday, December 14 at JALC’s Rose Theater, the event will see Miller joined by vocalist Brianna Thomas and the Patrick Bartley Sextet, led by one of NYC’s most acclaimed young saxophonists.