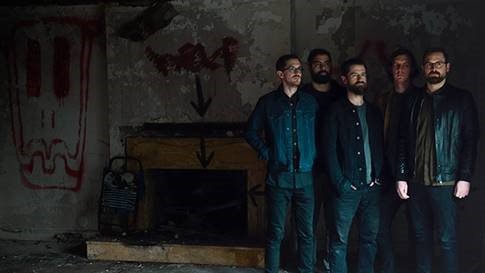 Canadian heavy alt rock and grunge outfit Sleepcircle have delivered their sophomore release, From the Heavens, Through the Window — available now.

“From the Heavens, Through the Window is an adventure through various states of the mind,” vocalist Curtis Sharp explains on the album as a whole. “Most songs were composed with mixed messages and hidden meanings.

“I even make a point of putting a specific reference to something in each song, however loosely related or trivial… For example, ’Nature Boy’ is a call to our rites of passage, whereas ‘Succubus’ is a basic amalgamation of my worst girlfriends.

“Acid Rain’ is an adventure in the petty nature of our culture, and ‘Pumpkin Head’ is an unusually ambiguous foray into politics. ‘Bring It On’ and ‘Apparition’ are an adventure through mental health.”

Much like “Pumpkin Head,” Sharp continues, the album art is done in such a way that you can orient it upside down or right side up to reveal a different picture, but the title remains readable. “Long story short, the album travels through common cycles of inner turmoil and social issues and can be enjoyed simply for the music, or in deep connection with its many meanings.

“My hope is the playful dance with difficult topics nudge the listener a little closer to sanity.”

Formed in 2014 by guitarists Paul Wilson and Kavian Iranzad, Sleepcircle is rounded out with bassist Ian Jay Lavery, drummer (and Paul’s brother) Andrew Wilson, and Sharp on vox. Their debut Dead Wait was released in 2017.

From the Heavens, Through the Window is available now.