Julien’s Auctions, the world-record breaking auction house, will hail the legendary King of the Blues with PROPERTY FROM THE ESTATE OF B.B. KING taking place Saturday, September 21 live at The Standard Oil Building in Beverly Hills and live online at juliensauctions.com. This spectacular auction of the revered fifteen-time Grammy Award-winning artist, singer and founding father of the electric blues, who inspired a generation of musicians and artists including Jimi Hendrix, The Beatles, Eric Clapton, Jeff Beck and more, will feature an unsurpassed collection of his instruments, stage worn jackets, jewelry, awards, personal items and more from the titan’s celebrated career spanning six decades. 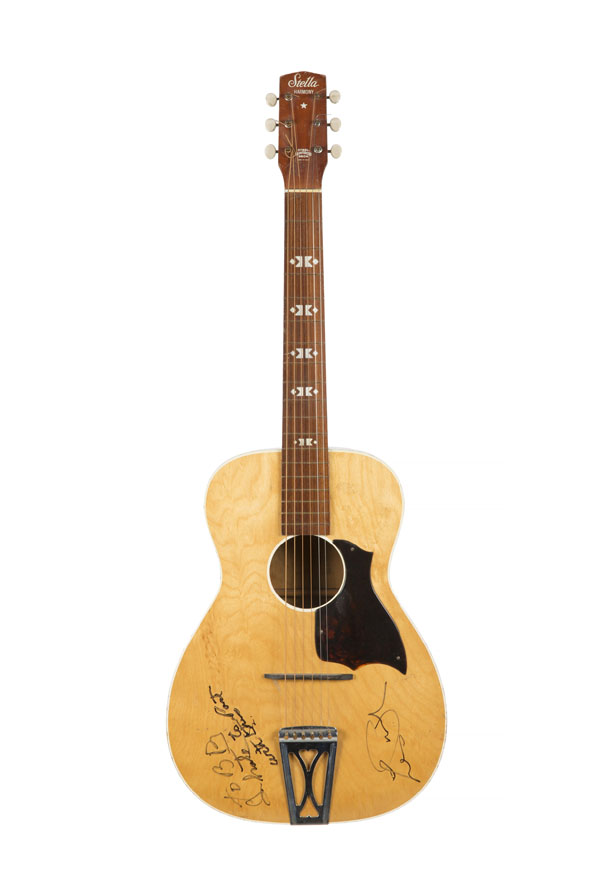 Born Riley B. King in Atta Bean, Mississippi, on September 16th, 1925, King began playing gospel music on street corners as a teen. In 1947, he hitchhiked to Memphis, TN, to pursue his music career and studied the blues with his cousin Bukka White, one of the most celebrated blues performers of his time. He landed his first big break on Sonny Boy Williamson’s local radio show which led to other prolific gigs in Memphis, where he was inspired by other blues greats including Louis Jordan and T-Bone Walker. While developing a following in the Beale Street blues scene in the late 1940s/early 1950s, King began crafting his signature electric blues sound. After changing his name to Beale Street Blues Boy and later abbreviating it to B.B. King, the blues legend with his electric guitar was born. In 1949, the famous legend of his “Lucille” guitar was born when, during one of King’s shows, a fire broke out during a brawl and King went back into the burning building to save the guitar, narrowly escaping his own death. When he discovered that the brawl was over a woman named Lucille, he named his guitar ⁠—and each one of his trademark Gibson guitars in the decades to come ⁠—after her to remind himself to never fight over a woman or run into a burning building. 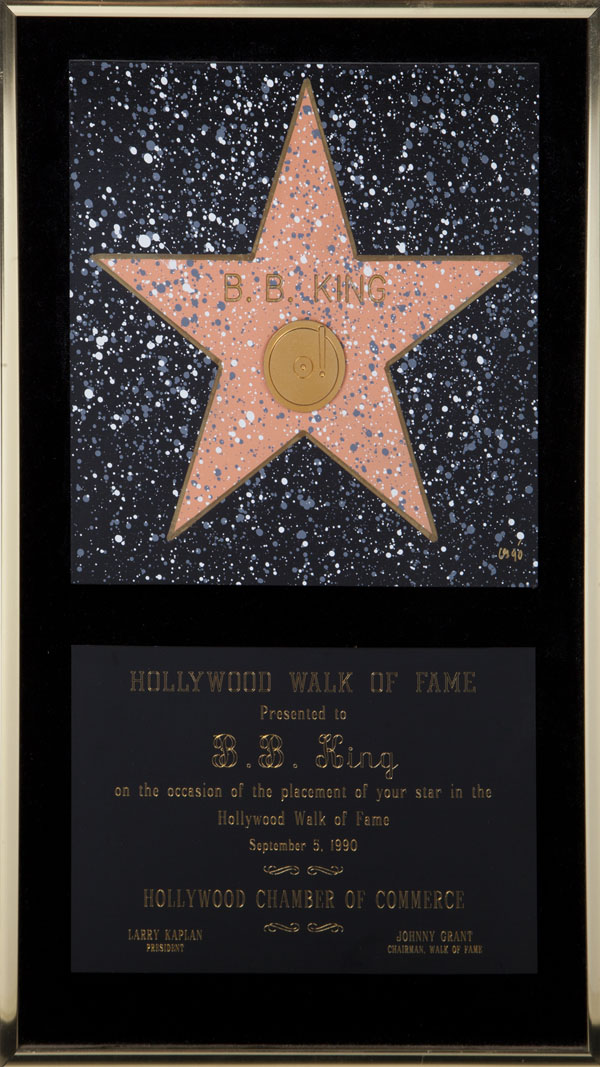 In the 1950s, King was considered one of the most important R&B artists with his first Number One Billboard R&B hit, 1952’s “3 O’Clock Blues,” and the string of hits that followed including, “You Know I Love You,” “Woke Up This Morning,” “Please Love Me,” “You Don’t Know Me,” “When My Heart Beats like a Hammer,” “Whole Lotta Love,” “You Upset Me Baby,” “Every Day I Have the Blues,” “Sneakin’ Around,” “Ten Long Years,” “Bad Luck,” “Sweet Little Angel,” “On My Word of Honor,” and “Please Accept My Love” —all of which made him one of the top touring artists —as he clocked in a record-breaking 342 concerts in 1956. In the 1960s, his distinct guitar style of complex, vocal-like string bends and unmistakable vibrato developed a massive following and deep appreciation by the decade’s greatest English rock legends including Eric Clapton, George Harrison and the Rolling Stones. He gained greater visibility of his artistry and sound among rock audiences at grand concert halls and festivals including, the 1968 Newport Folk Festival and Bill Graham’s Fillmore West, where he headlined with the greatest contemporary rock artists of the time, who idolized King. The 60s also brought him greater fame with the release of Live at the Regal in 1964, the hits “Sweet Sixteen, Part I,” “Don’t Answer The Door, Part I,” “Lucille” and his heralded opening act stint on the Rolling Stones’ 1969 American Tour. In 1970, he won a Grammy Award for his most popular crossover hit “The Thrill Is Gone,” which went to No. 15 on the Pop charts.

From the 1980s until his death in 2015, King toured extensively and appeared in numerous television shows and films including Blues Brothers 2000, where he played the lead singer of the Gator Boys along with Dr. John, Bo Diddley and others. He reached further commercial success with his 1988 duet, “When Love Comes to Town,” with the supergroup U2 and the double platinum Grammy Award-winning blues album, Riding with the King (Reprise Records, 2000) with Eric Clapton. From 1991-2000, five B.B. King’s Blues Club locations opened in Memphis, Universal CityWalk in Los Angeles and New York City’s Times Square as well as two clubs at Foxwoods Casino in Connecticut. In 1996, the critically acclaimed CD-ROM, On The Road With B.B. King: An Interactive Autobiography, was released as well as King’s autobiography, Blues All Around Me (written with David Ritz) was published. By 1998, it was estimated that King had played more than 15,000 concerts during his 65 years touring on the road. 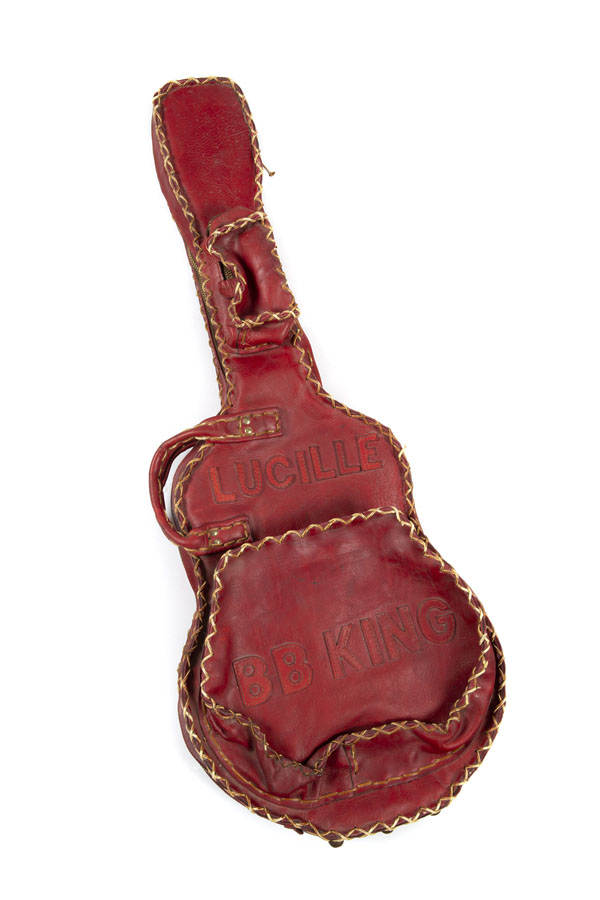 King’s many honors included inductions into the Blues Foundation Hall of Fame in 1984 and into the Rock and Roll Hall of Fame in 1987; the NARAS’ Lifetime Achievement Grammy Award in 1987; honorary doctorates from Tougaloo (MS) College in 1973, Yale University in 1977, Berklee College of Music in 1982, Rhodes College of Memphis in 1990, Mississippi Valley State University in 2002 and Brown University in 2007. In 1990, he received the National Medal of Arts and the National Award of Distinction from the University of Mississippi in 1992. In 2008, the B.B. King Museum and Delta Interpretive Center opened in Indianola, Mississippi. He died on May 14, 2015 at the age of 89 and is buried at the museum that bears his name. 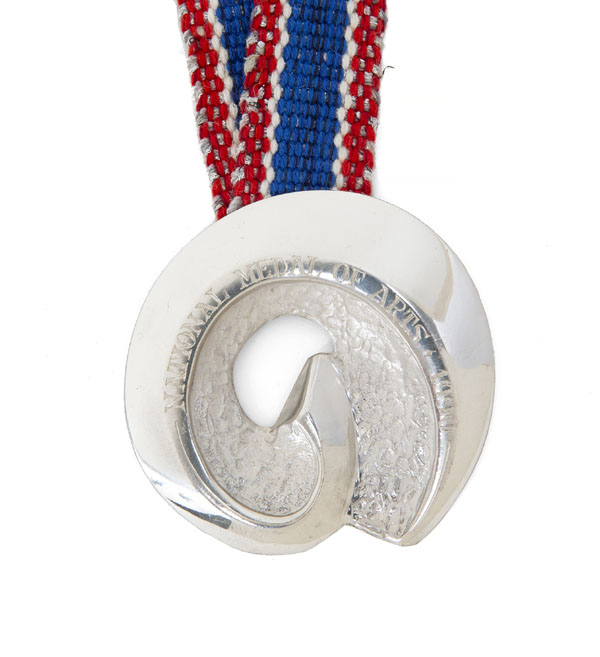 The most coveted item of the auction will be King’s stage played black Gibson ES-345 prototype 1 for 80 limited edition Lucille guitar that was gifted by Gibson to B.B. King on his 80th birthday. This “Lucille” was heavily used by King and served as his primary guitar on tour in his later years. The head stock has “B.B. King 80” and a crown inlaid with mother-of-pearl, “Gibson” on a gold plate, and the pickguard reads “[crown] B.B. King” in gold. The pickups read “B.B.” in gold and the back of the headstock reads “Prototype 1.”The guitar is accompanied by a hard leather case with “B.B. King” embroidered in gold and is estimated at $80,000-$100,000. (photo above right: King’s inscribed guitar red leather case)

Other highlights on offer include: