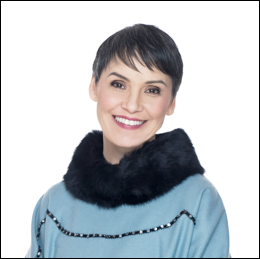 During a career that has spanned more than 25 years, Susan Aglukark’s journey as a singer-songwriter has led her to reflect on who she is, where she comes from and the importance of discovery – discovery of history, culture and self. The decorated musician is recognized as the first Inuk artist to win a JUNO Award, a Governor General’s Performing Arts Award for lifetime artistic achievement, and is an officer of the Order of Canada – and this year she will be inducted into the Western Canadian Music Hall of Fame.

“It is truly an honour to receive this award,” reflects Aglukark. “I believe we are living in times when our collective stories are more potent in the larger Canadian/historical context and what a privilege to have opportunities to tell these truths. Matna! Thank you!”

The award will be presented to Aglukark on October 3rd at the WCMA Artists Awards Reception, taking place during BreakOut West in Whitehorse, YT. The Hall of Fame Award annually recognizes an artist/band that has made a significant impact in their career; traditionally being awarded to an artist/band from the host province.

BreakOut West will take place from October 2-6, 2019 in Whitehorse. Now in its 17th year, the event will bring together artists, industry professionals, and the music-loving community, with four days of live performances, business opportunities, career development, and camaraderie.

The annual conference, showcase festival and awards celebration was last hosted in Whitehorse in 2011, when we saw 54-40 inducted into the Western Canadian Music Hall of Fame, and delegates were treated to a sold out showcase festival and awards show, along with incredible Yukon highlight activities such as dog sledding. The 2019 event will include a three-night music festival of new talent from western Canada, a four-day career development conference and international industry program, awards programs honouring the best of Western Canada’s artists and industry, and much more. For more information as the event develops, and for year-round opportunities supported by BreakOut West, visit www.breakoutwest.ca.