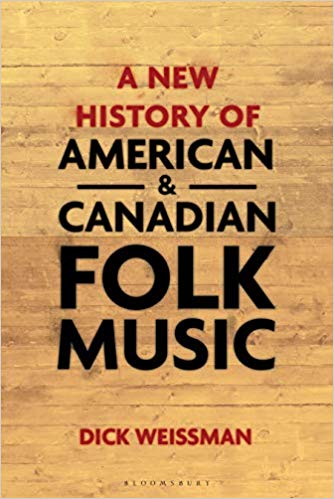 Building on his 2006 book, Which Side Are You On?, Dick Weissman’s A New History of American and Canadian Folk Music presents a provocative discussion of the history, evolution, and current status of folk music in the United States and Canada. North American folk music achieved a high level of popular acceptance in the late 1950s. When it was replaced by various forms of rock music, it became a more specialized musical niche, fragmenting into a proliferation of musical styles. In the pop-folk revival of the 1960s, artists were celebrated or rejected for popularizing the music to a mass audience. In particular the music seemed to embrace a quest for authenticity, which has led to endless explorations of what is or is not faithful to the original concept of traditional music.

This book examines the history of folk music into the 21st century and how it evolved from an agrarian style as it became increasingly urbanized. Scholar-performer Dick Weissman, himself a veteran of the popularization wars, is uniquely qualified to examine the many controversies and musical evolutions of the music, including a detailed discussion of the quest for authenticity, and how various musicians, critics, and fans have defined that pursuit.

Dick Weissman is Associate Professor Emeritus at the University of Colorado at Denver, USA, and has been involved with the North American folk revival as a musician, performer, composer and scholar. He is the author of many critically acclaimed books about American roots music and the music industry, including The Folk Music Sourcebook (1989), which won the Deems Taylor ASCAP Music Critics Award; The Music Business (5th edition 2003), which sold over 100,000 copies; Navigating the Music Industry (2003); Which Side Are You On?: An Inside History of the Folk Music Revival in America (Bloomsbury, 2006); and Songwriting: The Words, the Music, and the Money (2010).