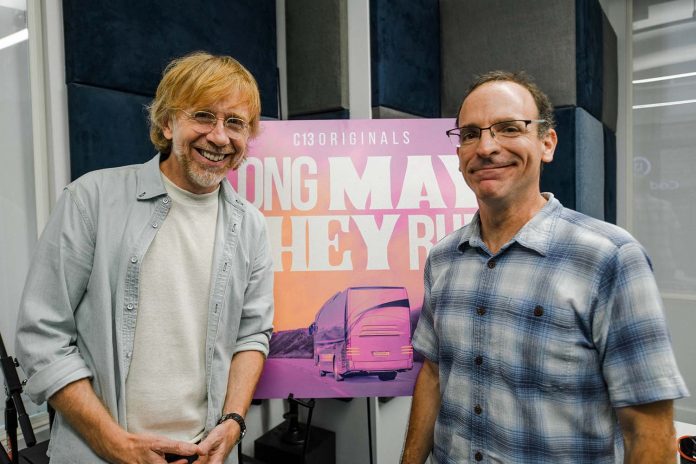 C13Originals, a division of leading premium podcast company Cadence13, today announced the launch of Long May They Run, a groundbreaking music documentary series about iconic touring bands who have a lasting impact on music culture, the industry, music streaming, touring, their fans and beyond. Season One of Long May They Run will focus on the band Phish, exploring in depth the journey that made them one of the most successful and influential touring bands of all time, and how they redefined the bond between artist and audience, created a way of life, and innovated an entire industry along the way.

Created, directed and produced by C13Originals, and hosted and written by Dean Budnick—veteran music journalist, Editor-in-Chief of Relix Magazine, author, and filmmaker—each season of Long May They Run will explore the greatest, most successful, pioneering, touring and iconic and bands of all time, whose communities and followings grow larger with each decade that passes, who have a deeply rooted and emotionally intimate connection with their fans and who do not tour simply to promote an album, but who tour for touring’s sake. Told by those immersed in the music world—from insiders to fans to musicians—each season of Long May They Run will encompass one band, with each episode focusing on a topic relevant to its culture, pioneering, history and influence. This groundbreaking documentary series will give fans and listeners unparalleled insight into the impact of carefully chosen artists.

Long May They Run, Season One: Phish—which features new interviews with band members and the music of Phish—will explore how Phish revolutionized the music industry, shedding light on all of the areas that the band has helped to pioneer, from self-produced multi-day music festivals that created a blueprint for events like Bonnaroo to ticketing initiatives that disrupted the status quo to unprecedented streaming ventures. The series will also explore the Phish’s unique relationship with its devoted audience, its lasting impact on the concert industry and the many trails they blazed. With more than seventy-five interviews—including the voices of band members—Long May They Run, Season One: Phish will give listeners a rich and textured portrait of a band who pioneered an entire industry on many impactful and important levels, on their own terms.

Long May They Run, Season One: Phish will launch on September 18, 2019 with Episodes One and Two on Apple Podcasts, RADIO.COM, Spotify and everywhere podcasts are available, with new episodes available every Wednesday throughout the season. Listen to the trailer and subscribe to the series here.
.

“Our vision was to create and give music fans a franchise set apart from anything that’s been done in podcasting. We believe that Long May They Run accomplishes just that, and will provide an experience that takes Phish fans, and music fans in general, to the next level, and redefine what can be done in this space,” said Chris Corcoran, Chief Content Officer, Cadence13. “Dean is an astute and compelling storyteller and interviewer, and few bands have the musical and cultural impact of Phish, which made them the perfect choice for Season One.”

“I’m thrilled to have the opportunity to share these stories in this format,” said Dean Budnick. “Phish is such an innovative band and many of the group’s pioneering endeavors have been overlooked or nearly lost to history. It’s been a pleasure to work with the team at C13Originals to bring their far-reaching legacy to light.”

Over the course of ten-episodes in Season One, Budnick and guests will explore a wide range of topics including: the music festivals of Phish, including The Clifford Ball and Big Cypress, and the significant impact Phish’s festivals have had on Bonnaroo and other events; the personal and professional legacy of former Paradigm head of music Chip Hooper, the renowned booking agent who helped Phish secure its independence through the deals he masterminded with Ticketmaster and venues around the country; the band’s pioneering efforts in cyberspace, which has resulted in the creation of an environment where fans can now congregate and travel show to show via “Couch Tour;” the art of Phish, from their Jim Pollock-designed poster, tickets, and merchandise to fan art; why the band carries on the tradition started by the Grateful Dead of allowing tapers at their shows; the band’s activism through its Waterwheel Foundation and beyond; Phish’s famed Halloween shows, at which they don a “musical costume” and perform another artist’s album in its entirety; Phish’s ethos of taking the music but not themselves seriously, and the many gags the band is known for, from their annual stunts at their legendary New Year’s Eve shows at Madison Square Garden to the trampoline they bring on stage to the vacuum played by drummer Jon Fishman; references to Phish in pop culture including The Simpsons, The Office and Parks and Rec; the early days of the band in Vermont; and more.

Considered by many to be the best live act in America, each Phish concert is a unique experience, unlike any that preceded it, or any that will follow it. Nearing forty years together, Phish remains one of the biggest draws in music. In 2017, Phish made history by playing The Baker’s Dozen: thirteen consecutive shows at Madison Square Garden, while never repeating a song. A banner commemorating the achievement permanently hangs from the rafters in the arena. From their early newsletters to the LivePhish app, the group anticipated today’s direct fan engagement, while interacting with fans at their live shows via on-stage chess matches that allowed the audience to play the band, a “secret language” of special musical cues and a “Big Ball Jam.” The group’s management and support team consist of outliers and innovators whose work continues to resonate throughout the live entertainment industry.

C13Originals is the division of Cadence13 focused on original storytelling and developing a slate of IP through a new premium level in-house production studio, and creators of top podcast series Root of Evil: The True Story of the Hodel Family and the Black Dahlia and the white-collar crime docuseries Gangster Capitalism.

Dean Budnick is the editor-in-chief of Relix, a popular music publication. Budnick has covered the live music scene for over two decades, reporting for Billboard, Variety and The Hollywood Reporter. In 2002 he created the official Bonnaroo festival newspaper and has edited it ever since, while working on similar specialty publications for Phish, Dave Matthews Band, LOCKN’ and Fare Thee Well. He is the co-author of Blues Traveler front man John Popper’s memoir Suck and Blow: And Other Stories I’m Not Supposed to Tell as well as Ticket Masters: The Rise of the Concert Industry and How the Public Got Scalped, which chronicles the previously untold story of the modern concert industry.