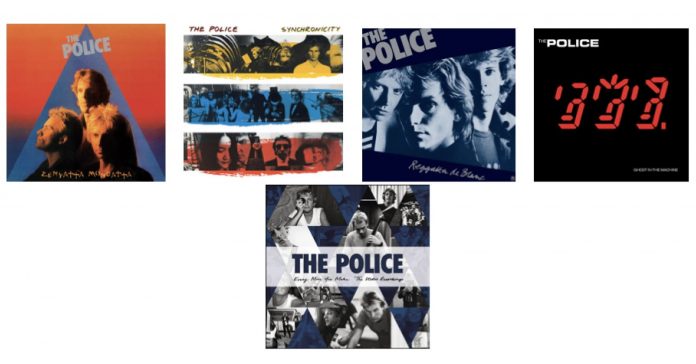 The Police will be reissuing re-mastered 180-gram heavyweight vinyl of ‘Reggatta de Blanc,’ ‘Zenyatta Mondatta,’ ‘Ghost in the Machine’ and ‘Synchronicity’ as well as a 6-CD boxset ‘Every Move You Make: The Studio Recordings’ that brings together all their studio albums with the addition of a bonus disc of B-sides entitled ‘Flexible Strategies,’ on November 8, 2019.

‘Reggatta de Blanc’ – Originally released in 1979, this is the band’s second album and their first album to reach No. 1 in the U.K. It features the band’s first two chart-topping hit singles – “Message in a Bottle” and “Walking on the Moon,” while the album’s title-track received the GRAMMY® Award for Best Rock Instrumental Performance in 1980. In 2012, Rolling Stone magazine named it one of their 500 greatest albums of all time.

‘Zenyatta Mondatta’ – The third Police album, released in 1980, is regarded as one of the finest rock albums of all time and again reached No. 1 in the U.K. album chart, as well as No. 5 in the U.S., and features two classic hit singles – “Don’t Stand So Close to Me” and “De Do Do Do, De Da Da Da.” The album won two GRAMMY® Awards including Best Rock Performance by a Duo or Group with Vocal for “Don’t Stand So Close to Me” and Best Rock Instrumental Performance for “Behind My Camel.”

‘Ghost in the Machine’ – Originally released in 1981, their fourth studio album was No. 1 on the U.K. album chart, No. 2 in the U.S. and is a multi-platinum bestseller. It features three hit singles – “Every Little Thing She Does Is Magic,” “Invisible Sun” and “Spirits in the Material World.” Their jazz influences became more pronounced, but the album had a very strong, sophisticated pop appeal. This album was also included in Rolling Stone magazine’s 500 greatest albums of all time.

‘Synchronicity’ – The fifth and final studio album was released 1983 and was the band’s most commercially successful album. This album made The Police global superstars, reaching No. 1 on the Billboard 200 chart and generating no less than four classic hit singles – “Every Breath You Take,” “King of Pain,” “Wrapped Around Your Finger,” and “Synchronicity II.” At the 1983 GRAMMY® Awards, the album was nominated for a total of four awards, including Album of the Year, and won for Best Rock Performance By a Duo or Group With Vocal for the title track “Synchronicity” and Best Pop Performance By a Duo or Group With Vocal “Every Breath You Take.” ‘Synchronicity’ is considered one of the most important albums of all-time consistently appearing in “Greatest Album Lists” and earning an induction into the GRAMMY® Hall Of Fame in 2009.

Following the 40th-anniversary vinyl box of the same name, ‘Every Move You Make: The Studio Recordings’ is a limited edition 6-CD box set, featuring all five studio albums plus a bonus 12-track disc – ‘Flexible Strategies’ – comprised of non-album b-sides (including a very rare remix of “Truth Hits Everybody”). All albums are full-color gatefold CD digipak wallets housed in a lift-off lid clamshell-style box and have been remastered at Abbey Road. The Police’s studio albums include – ‘Outlandos d’Amour’ (1978), ‘Reggatta de Blanc’ (1979), ‘Zenyatta Mondatta’ (1980), ‘Ghost in the Machine’ (1981) and ‘Synchronicity’ (1983).

Formed in 1977, The Police are comprised of Sting, Stewart Copeland and Andy Summers. During their existence, their contribution to the lexicon of rock was immense. The originality of their music fused elements from both punk and reggae to form a brilliant new style that can only be described as “Music of The Police.” Having sold in excess of 50 million albums worldwide, The Police had phenomenal chart success and earned a multitude of accolades both public and critical, but they never allowed such peripherals to overshadow their commitment to the music itself.