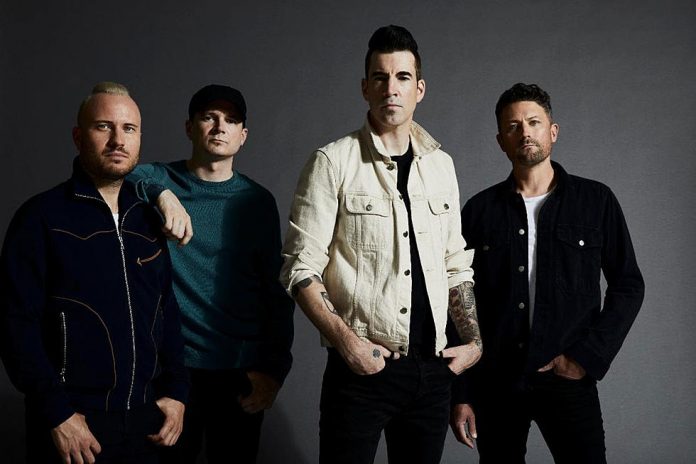 Multi-platinum band THEORY (Theory Of A Deadman) has released their new single “Strangers” from their forthcoming studio album Say Nothing, out January 31st. Addressing the current tense state of American politics and the divisive nature of our culture, “Strangers” strikes a chord with its thought-provoking prose, calling out how nasty it has become between those with differing political affiliations and our society’s increasing inability to openly listen and relate to one another. On Say Nothing, THEORY is speaking up through timely lyrical commentary that finds the band’s finger on the pulse of the current climate and the issues that our society is grappling with today, threaded together with a message that’s both a cautionary warning and a hopeful wish for our collective future.

“‘Strangers’ talks about American politics and the divisiveness our country is facing right now,” shares lead vocalist and songwriter Tyler Connolly. “It was inspired by the continuous onslaught of tragedies that keep happening. On this song, I’m not trying to speak from a perspective of bias, I just can’t figure out why we can’t all do it together. We need to come together instead of pitting against one another. We hope the song serves as a bit of a wake-up call. We’ve become so desensitized to it all that I think it’s imperative for us to start talking about these kinds of things in our music.”

“Strangers” is the follow-up to Say Nothing’s lead single “History Of Violence,” which has already racked up more than 2 million collective streams, is currently #13 and rising at Active Rock Radio, and has been featured on key playlists across Spotify, Apple Music and Amazon Music, including Spotify’s New Music Friday. Telling a gripping story that turns the tables on domestic violence, the video for “History of Violence” illustrates a searing snapshot of a woman enduring an abusive husband as she plans to fight back, eventually ending up in jail but free of her abuser. PRESS HERE to watch the video which has more than 1 million views. THEORY is encouraging anyone affected by domestic violence to call the National Domestic Violence Hotline (1-800-799-7233) for help.

Peeling back the layers of THEORY’s depth and breadth like never before, Say Nothing, recorded in London with producer Martin Terefe [Jason Mraz, Yungblud], is a continuation of their musical and thematic evolution, displaying the band’s powerful storytelling in full force and introducing fresh sounds and sonics. With undeniable anthems, scorching songcraft, experimental vision, rock ‘n’ roll attitude, and clever pop ambition, THEORY explores domestic violence, racism, the divisiveness in American politics, anxiety and depression, and more on the 10-track album.

Following a recent fall headlining U.S. run, THEORY embarks on a U.K. headlining tour beginning November 19th and will then travel throughout their native Canada at the top of 2020 to coincide with the release of Say Nothing, commencing January 31st in Vancouver.