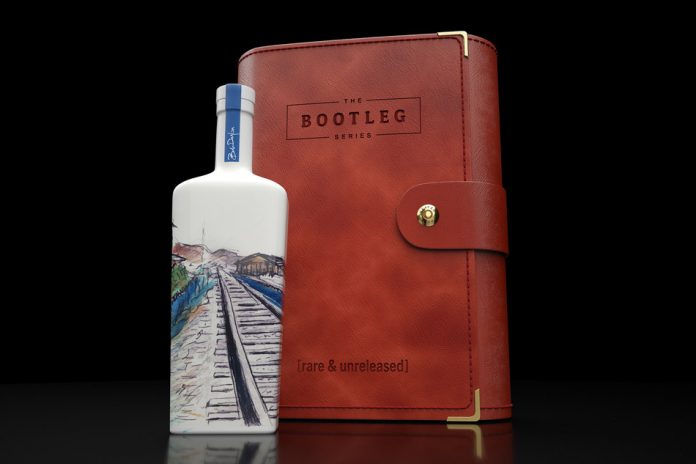 Today, Heaven’s Door Spirits, which produces an ever-evolving collection of American whiskeys in collaboration with Bob Dylan, announces the first expression of its limited edition Bootleg Series, a rare 26-year old whisky finished in Japanese Mizunara Oak barrels. This first release, dubbed Volume 1 of the Bootleg Series, is both a celebration of the creative spirit of Bob Dylan and the craft of fine whiskey at its best. Offered in hand-made ceramic bottles featuring one of Bob Dylan’s best-known paintings, Train Tracks, this 2019 Edition comes beautifully housed in a uniquely designed and individually numbered collectible leather journal.

The 2019 edition of the Bootleg Series gives nuance to this whisky through a secondary aging in Mizunara Oak barrels, resulting in a distinctive and supple flavor profile. Bottled with a proof of 111.5, the low rye content of this whisky’s mashbill allows for the signature flavors from the Mizunara Oak barrels to shine through, with a smooth, long finish.

The Bootleg Series, which is named in tribute to Bob Dylan’s famed series of retrospective albums, will feature annual limited edition releases of specially crafted new whiskeys, uniquely aged, blended or finished, for a one-of-a-kind offering. Each annual release will be presented in hand-made ceramic bottles featuring one of Bob Dylan’s paintings, with each bottle being housed in its collectible case.

With fewer than 3,000 bottles for sale at a suggested retail price of $499.99 for a 750ml bottle, the 2019 Edition of The Bootleg Series is now available for pre-order via ReserveBar.com/products/the-bootleg-series-by-heavens-door and will be online and in select retailers nationwide in early December. Each Volume of the Bootleg Series is a one-time release, and once all the bottles are sold, they will be gone for good.

Heaven’s Door’s portfolio of whiskeys is available nationwide and online via Reservebar.com/collections/heavens-door.