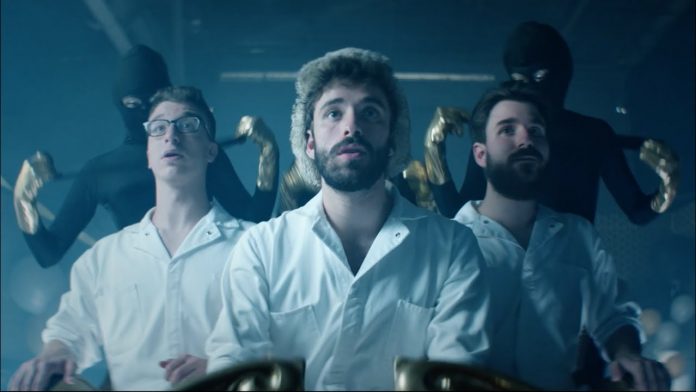 AJR recently sold out the most prestigious, high-capacity venues of their career including NYC’s Radio City Music Hall and Colorado’s Red Rocks Amphitheater on their first leg of THE NEOTHEATER WORLD TOUR and sold over 130,000 total tickets in 2019. Today, the band has announced NEOTHEATER WORLD TOUR PART II with over 20 cross-country North American performances taking place Spring 2020. The band is already slated to perform at Lollapalooza in Argentina, Chile and Brazil next year.

The trio’s current single “Dear Winter” just hit 30mm total streams and is now in rotation on over 100 radio stations across the U.S.. The song was a top 5 most added track at Top 40 radio, and top 10 most added at Hot-AC on impact week. “Dear Winter” also continues to climb the Alternative radio chart where it recently entered the top 25. With three consecutive Platinum-certified singles, 3 top 5 Alt radio singles, a gold album and over 2 billion streams, AJR adds another achievement of hitting 1 million followers on Spotify this month.

AJR has confirmed a live-streamed concert with iHeartRadio set for Monday December 16th, 2019. Past livestream concerts include Fall Out Boy, Gwen Stefani and Jon Bellion.

AJR’s latest album Neotheater (AJR Productions/S-Curve/BMG) debuted at the top of the Billboard charts earlier this summer — at #8 on the The Billboard Top 200 and #1 on both the Alternative and Rock Albums charts plus #4 on the Top Albums chart and #3 on the Pop Albums chart.

Tickets are on sale to the general public beginning Friday, November 22 at 10am local time at LiveNation.com

My Next Read: Crossroads: In Search of the Moments that Changed Music By Mark Radcliffe