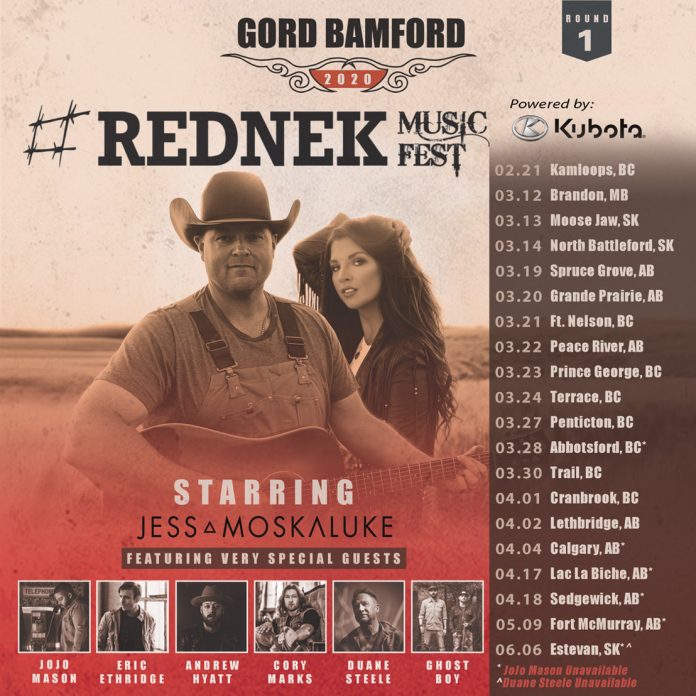 Multiple JUNO, CCMA and CMA award-winning singer/songwriter Gord Bamford will be hitting the road across Canada in 2020 with his #REDNEK Music Fest tour that will showcase a broad range of homegrown country music artists including the hottest emerging acts in Canada. Along with Bamford, the show stars multi-platinum, JUNO Award winner Jess Moskaluke, and an incredible line-up of rising talent including Andrew Hyatt, Cory Marks, Duane Steele, Eric Ethridge, Ghost Boy and JoJo Mason.

The #REDNEK Music Fest tour is set to kick off on Feb. 21 at the Sandman Centre in Kamloops, B.C. The first round of dates will cover western Canada into the spring, with an eastern Canadian round of shows expected to be announced soon.

The tour coincides with Bamford’s latest single, “To Get To You” featuring Jess Moskaluke and the success of his previous single #REDNEK, both from his forthcoming ninth studio album. The theme #REDNEK inspired him to conceive a tour consisting of likeminded artists. “I’ve always wanted to do a traveling festival where you can hear a great variety of new music,” he says. “I want to hit as many towns in this country as possible. The shows will predominantly be in arenas, but we’re not afraid to go to smaller towns with more intimate venues. I’m very excited to share the stage with the highly talented Jess Moskaluke, and to sing our new duet for the fans.”

Moskaluke shares those sentiments, adding, “I’m thrilled to be joining Gord on his #REDNEK cross Canada tour. Gord has an incredibly loyal fanbase, and I can’t wait to get back out on the road to share some new music we’ve been working on as well as some fan favourites, with everyone!”

2019 has proven to be a busy year for Bamford with MusiCounts announcing him as the 2019-2020 recipient of the MusiCounts Inspired Minds Ambassador Award, presented by The Canadian Scholarship Trust Foundation. The award recognizes individuals who have had an extraordinary impact on music education and MusiCounts over the course of its history.

Since 2014, Gord Bamford and the Gord Bamford Foundation has donated $200,000 to MusiCounts to support school music programs, the largest donation ever received from an artist in MusiCounts’ history. These donations provide instruments grants to children across Canada and give generations of students the opportunity to enjoy the incredible benefits of music in school.

Andrew Hyatt was named an “Artist To Watch” by Entertainment Tonight Canada, the Sudbury native is currently working on new music to follow up his back to back Top 10 radio hits (“On Me” and “Do It With You”), and current single “Didn’t Know Me” which is soaring up the charts with over 1 million streams to date. With a mixture of rebellion and respect for tradition, Hyatt was one of the Top 10 most played Canadian Country artists at Country Radio in 2018. Winner of the 2018 CMAO Award for “Rising Star” and nominated for Male Artist of the Year in 2019, Hyatt was also crowned the winner of SiriusXM’s “Top of the Country” competition last September. Most recently presented during the 2019 CCMA Awards national broadcast.

Duane Steele has been one of Canada’s most highly regarded country artists since he first came on the scene during the mid-1990s. The Hines Creek, Alberta native has won multiple CCMA awards and has toured with Shania Twain, Trisha Yearwood, Terri Clark and others. His latest single is “Breathing Your Air.”

Eric Ethridge of Sarnia, Ontario was recently nominated for the 2019 CCMA Rising Star award on the strength of his Top 40 single “If You Met Me First.” A former chiropractor, he is now based in Nashville and working on his full-length debut album.

GhostBoy are Denis Dufresne and Aaron Young, two multiple award-winning, session and live musicians who have performed on global stages and recorded or toured with hundreds of artists. As country as the Eagles and as rock as Blue Rodeo, these Ghosts are standing in the spotlight, and it’s got our attention.

JoJo Mason is known for his infectious optimism, fun-loving personality and intoxicating storytelling, the 604 Records recording artist has quickly made a name for himself in the Canadian country music scene since releasing his debut single “It’s All Good” in 2015. With over 14 million collective streams to date and five Top 10 singles, the 2019 CCMA Awards nominee for Rising Star released his second EP, Chapter Two in the fall, and followed with his first headlining tour (The Hug Life Tour).