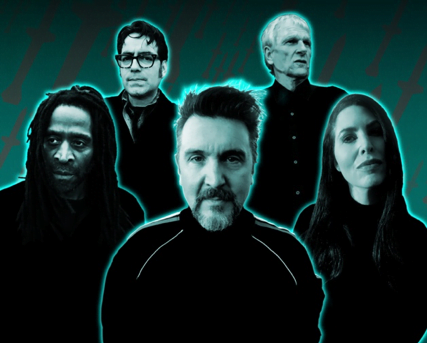 Platinum-selling band Big Sugar drops “The Better It Gets” today, the first track from their brand-new album Eternity Now set for release on March 27, 2020. This anticipated new track comes five years after their last album and Big Sugar is thriving with a new wave of energy, enthusiasm and optimism.

Grammy-nominated Gordie Johnson applies his signature 1970s thump and psycho-acoustic dub effects throughout the production of Eternity Now. Recorded and mixed at his Soundshack Studio in Austin, Texas, the album was written and composed entirely by Gordie and his wife Alex, resulting in a deeply personal record. Each track is rooted in his history of depression, addiction, self-destruction and redemption. After band-member defections and dealing with the death of Rasta elder and longtime band member Garry Lowe in July 2018, Eternity Now as an album and “The Better It Gets” as the first single, represent the next chapter in their personal lives and that of Big Sugar.

“‘The Better It Gets’ is an anthem to the power of neuroplasticity – the brain’s ability to build new neurological pathways. I’ve lived it,” states Gordie Johnson. “If the message in our song can help even just one other person out there, it gives me inspiration to keep howling into the microphone.”

And howl he does. You can hear the magic flying between Johnson and his diverse troupe, this is a new kind of magic: a shiny alchemy that complements their hard-won transformation. A leaner, cleaner sound that swings from Tejano border rock to prog and psychedelia thanks in part to a guest appearance by Alex Lifeson of Rush on the title track. Gordie Johnson’s Big Sugar includes longtime friend and bassist Big Ben Richardson, keyboard and percussionist Alex Johnson, Rey Arteaga a master of Afro Cuban rhythms on congas, and Reggae drummer Richard Brown.

In the 90s Big Sugar emerged clad in Hugo Boss suits as the antithesis to the grunge esthetic with a unique combination of Jamaican rhythms, blues tonality and heavy rock aggression. They dominated the airwaves and highways with songs like “Diggin A Hole”, “The Scene”, “Turn The Lights On” and “Roads Ahead”. Their roots-rock-reggae style has built a loyal following, earning Big Sugar a Road Gold Award as they continue to sell out concerts across North America. Gordie Johnson’s guitar playing continues to influence a new generation of young guitarists as well as peers. To quote lyrics from the first single off the upcoming new album Eternity Now, “The better it gets, the easier it gets to get better.”

Big Sugar will be announcing upcoming North American tour dates in the weeks to come.