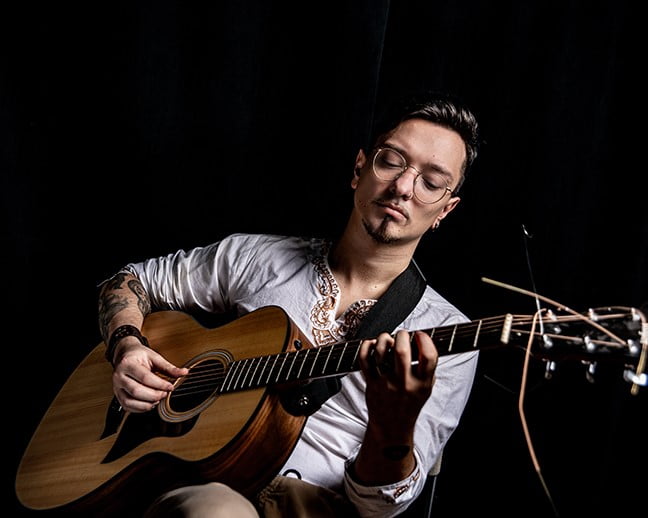 Electro-funk songwriter SIGGI is out with a brand new neon dream of a video for his new single, “Better Man” — available now!

With the vibe of video game avatars come to life, “Better Man” and its video take a long walk— literally — in search of connection.

“It comes down to one overall, related message,” Siggi explains. “Something is missing between one another, and I try to define what it is.”

That quest is endeavoured upon throughout the entirety of Human Touch, Siggi’s sophomore release, set to land this July. “Human Touch is my first concept album,” he offers. “It’s centred on social aspects and individual strength… It’s a roller coaster of emotions based on human interaction and behaviour.

“Toronto is multicultural, exhilarating, and challenging,” he continues, relating it back to his new home city of YYZ. “It’s not about race, gender, or political ideologies… It’s about humanity.

“The sound and mood change in each track, but it still blends together.”

“He” in reference is also known on ID pieces in his wallet as Daniel Sigismondi; Siggi is the Italian-born genre-bending lead singer, songwriter and multi-instrumentalist’s display of creative craftsmanship at its finest.

Originally from San Benedetto, Italy, Siggi found himself in a tough spot: drums and punk were his jam, through and through, and provided an outlet for the self-described sense of rage and rebellion he felt within the seemingly claustrophobic provincial culture he was surrounded by. After moving to Milan at age 18, his sound shifted to jazz, blues and soul. “Beauty is in the difference, and that’s how I started appreciating creating music,” he recalls. “Even though drums were originally my passion, I always felt like there was a part of myself I needed to discover.”

Sigismondi eventually caved to the curiosity, and he picked up a guitar. “Soon I was devoting my time to a solo career, composing songs, recording my own material, and writing lyrics.”

With 2017’s breakout single, “Devil on My Shoulder,” Siggi’s debut five-track EP My Way Around would land later that year. On it, Sigismondi incorporates Italian songwriting influences with modern funk, before polishing them into dynamic and easily danceable sounds.

“Now I’ve moved to Toronto with the goal to make people dance, to give the right positive message, and to connect — but in my own way,” he says. “I’m not saying everything has a purpose, but… Maybe.”