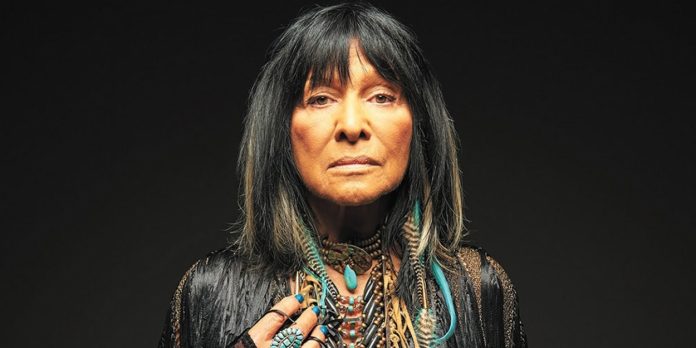 Canadian Music Week is pleased to announce Buffy Sainte-Marie as the 2020 recipient of the Allan Slaight Humanitarian Spirit Award. Buffy will be honoured for her work over the last 60 years as a trailblazing musician, activist and educator at the annual Canadian Music and Broadcast Industry Awards Gala at Bluma Appel Theatre in Toronto on Thursday, May 21, 2020.

“Buffy Sainte-Marie sets the bar for everything the Allan Slaight Humanitarian Spirit Award stands for,” said Gary Slaight, CEO and President of Slaight Communications/Slaight Family Foundation. “For her, worldwide success and the status of music legend was not a personal goal, but an opportunity – an opportunity to try to right wrongs, an opportunity to give back to the planet, and an opportunity to alter the course of Indigenous lives through education.”

Fuelled by her dedication to music, art, philanthropy, social activism, and education, Buffy Sainte-Marie has been active in the music industry for nearly sixty years. Thought to be born in Saskatchewan on the Piapot Plains Cree First Nation Reserve in the Qu’Appelle Valley, Buffy Sainte-Marie was adopted to American parents and grew up in Massachusetts. This is where she discovered piano at a young age, and fostered her talents for music by composing songs and learning to play guitar. When she emerged onto the music stage in the 1960’s folk era, she was already writing diverse songs that would become international classics in country, rock, jazz, and pop.

“We are proud to take part in honouring Buffy Sainte Marie for her lifelong generosity of spirit,” said Canadian Music Week president Neill Dixon. “There are few international stars so firmly grounded in their roots, and so committed to upholding their cultural history, onstage and off. A generation of educated and aware First Nations youth have her to thank as they carry that history forward.”

Buffy Sainte-Marie has spent her whole life creating, and her artistry, humanitarian efforts, and Indigenous leadership have made her a unique force in the music industry. In 1969, she made the world’s first quadraphonic electronic vocal albums, Illuminations; in 1982 she became the first Indigenous person to win an Oscar; she spent five years on Sesame Street where she became the first person to breastfeed on national television. She’s been blacklisted and silenced. She’s written pop standards sung and recorded by Janis Joplin, Elvis Presley, Donovan, Celine Dion, Barbra Streisand, Joe Cocker and Jennifer Warnes. She penned Universal Soldier, the definitive anti-war anthem of the 20th century. She is an icon who keeps one foot firmly planted on either side of the North American border, in the unsurrendered territories that comprise Canada and the USA.

Over the course of her career, Buffy Sainte-Marie has received countless awards and honours for her creative and humanitarian work. Most notably, Buffy received an Academy Award, Golden Globe Award, and BAFTA Film Award for composing the smash hit Up Where We Belong from the motion picture An Officer and a Gentleman. She has been inducted into the Canadian Songwriters Hall of Fame, the JUNO Hall of Fame, and the Canadian Country Music Hall of Fame. She is also a Companion in the Order of Canada, and a recipient of the Governor General’s Performing Arts Award, Americana Music Association’s Free Speech in Music Award, Charles de Gaulle Award, Screen Actors Guild Lifetime Achievement Award, Gemini Award, multiple JUNO Awards, the Polaris Music Prize, two medals from Queen Elizabeth II, and countless honorary doctorates. Most recently, Buffy was recognized for her work as a social activist and educator with the Allan Waters Humanitarian JUNO Award, and the International Folk Music Awards’ People’s Voice Award.

Buffy began advocating for the protection of Indigenous intellectual property and performers from exploitation when she founded the Nihewan Foundation for Native American Education in 1966. The Foundation’s goal was to encourage Native American students to participate in learning, and to foster public awareness of Indigenous culture. It has since provided students and teachers with scholarships and teacher training, as well as access to core curriculum written from within Native American cultural perspectives that match National Content Standards. Most recently, Buffy has focused her advocacy on The Creative Native Project, which seeks to empower and inspire Indigenous youth to explore the field of creative arts and live production by creating community arts weekends under the guidance of professional mentors.

Tickets on sale now at http://cmw.net/awards/music-broadcast-industry-awards/