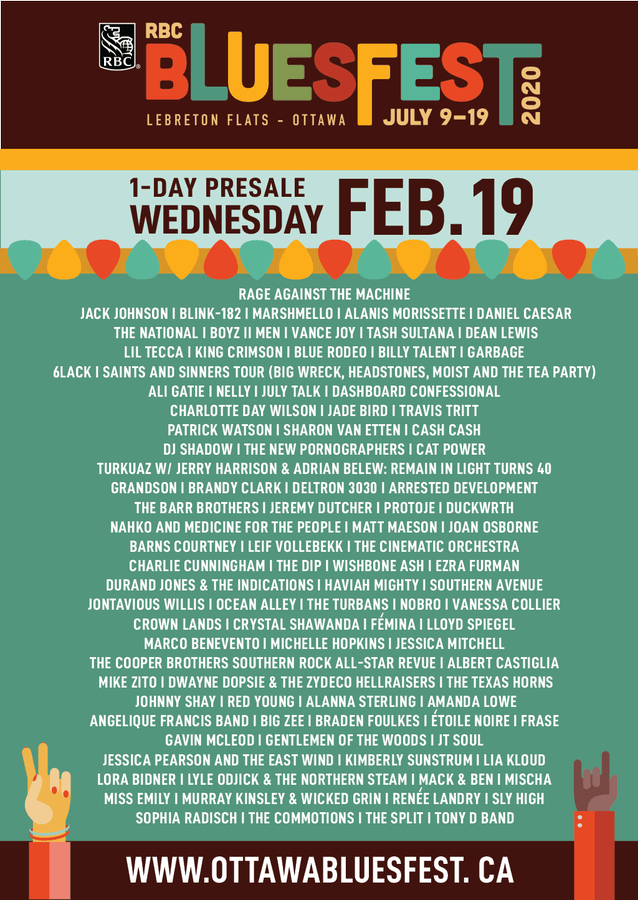 RBC Bluesfest organizers today announced a star-packed lineup for the summer of 2020. Included on the list below are previously announced acts, such as Rage Against The Machine, Jack Johnson, Vance Joy, Jade Bird, Marshmello, Lil Tecca, and the Saints and Sinners Tour featuring Big Wreck, Headstones, Moist, and The Tea Party.

From iconic favourites that have shown a timeless staying power to today’s top trending names that promise to be dropping hits for many years to come, this year’s festival boasts a wealth of world-class talent for what has become Ottawa’s ‘go-to’ music event of the summer.

“The response to the acts we announced during an early rollout in December for our Holiday sale was spectacular—and we feel confident that the talent we’re announcing today will definitely add to the buzz,” says Mark Monahan, the festival’s executive and artistic director. “I believe the strength of this year’s lineup is the depth of talent—we focussed on casting a wide net, reaching out to a broad demographic of fans—some well-known ‘flashes from the past’ and an impressive slate of international superstars, to go along with many other established and emerging acts.”

RBC Bluesfest runs from July 9 to 19. The festival site at LeBreton Flats Park offers a wide variety of food and merchandise concessions and is fully licensed.  Check the website for more to come in the weeks ahead.