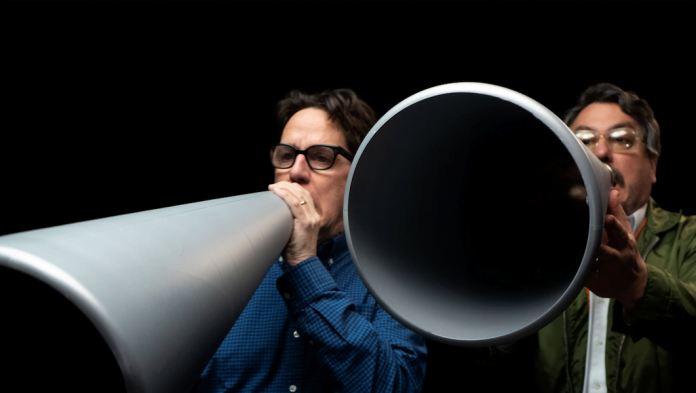 Two-time Grammy winners, They Might Be Giants solidified their place as alternative rock legends with the release of their platinum album Flood, celebrating its 30th anniversary in 2020. In honor of the album that made them an international act, the band is performing Flood in its entirety in select cities across the US. The first leg of 30 spring dates sold out instantly, with additional fall dates announced today going on sale this Friday, February 28. West coast stops include Los Angeles, Seattle, Portland + more. The show is “an evening with” which sees TMBG playing two full sets with their barnstorming live band and features the show-stopping Curt Ramm on trumpet. In recent interviews with The Ringer, American Songwriter, and Spin, the band discuss the beloved album’s seminal impact on the pop and rock landscape and promise to deliver their captivating exuberance and head-spinning spur-of-the-moment improvisations to rapturous audiences. This September also marks the 19th anniversary of Mink Car, They Might Be Giants’ notorious “lost” album, and the band will perform all of their favorite tracks on select dates along with crowd-pleasers old and new.

Additionally, a special Flood picture disk re-issue is available now, featuring original album cover art as well as a brand new animated psychedelic zoetrope image of TMBG ephemera created by Paul Sahre. In August, TMBG offered up a special limited edition benefit t-shirt with 100% of profits going to RAICES, a Texas legal team aiding separated families and detained minors seeking asylum in the US. Through the generosity and passion for the cause of Jeff Lawson, the founder of Twilio who offered to match any funds raised by the band, they raised a total of $200,000.

TMBG started with a Dial-A-Song service, powered by a lone phone machine out of their Brooklyn apartments. Since then they have made 22 albums, and have secretly infiltrated your TV with original themes and incidental music to numerous shows and commercials. Catch the band live in a city near you and stay tuned as they work feverishly to complete that elusive 23rd album.

To catch up with latest Dial-A-Song posts go to www.dialasong.com! US folk can call toll free at +1 (844) 387-6962 for the authentic telephonic experience.