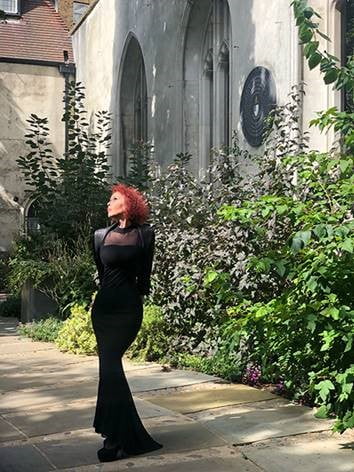 If the key to happiness and a life well-lived is saying “I Followed My Heart,” then award-winning, internationally acclaimed contemporary jazz songstress Fiona Ross — and the title of her new single and video — can say she did just that.

“I love singing this song!” Ross exclaims, adding that, of all the songs on her most recent album, Fierce and Non-Compliant, “I Followed My Heart” is the one she most enjoys.

“In fact, I have many emotions connected to this song,” she continues. “It was the last song I recorded for the album, and it has two special guests: Kim Cypher on saxophone, and the multi-award winning Adam Cooper on vocals.”

For the latter, the duet was a throwback to their early school days when the pair would sneak out of class, break into the rehearsal room, and sing George Gershwin songs together, Ross recalls.

That said, Ross opted for a church as the setting for “I Followed My Heart” vs. a rehearsal room — and how she found it is a funny story in and of itself.

“I spent a few months basically wandering into churches across London, bursting into song and then leaving,” she recalls, laughing. “I selected St Cuthberts Church as it was beautiful and the acoustics worked well with my voice.

“I love singing in churches because the acoustics give my voice freedom,” she marvels. “I actually don’t like singing in a studio environment.”

The video was recorded earlier this spring and features Derek Daley on bass; the video was filmed and directed by Alexander Barnes-Ross, with sound recording from Warren Woodcraft and support from Andrew Turner and Tony Barnes.

“I wanted to do some live sessions, but keep it quite intimate and real. On the album, it has the full band and sounds fab, but doing the video with just Derek was so wonderful.

“I wanted to do a video that was just fun, and about enjoying singing… No fancy make up artists… No fancy settings… Just me doing my thing!”

Ross ‘doing her thing’ is the theme of importance on Fierce and Non-Compliant, and deservedly so.

“Her style is poetic and the messages ooze with Millennial angst,” says Jazz Weekly of Ross’ heart-wrenching ballads and demonstrable lyricism. “This is fabulous, sultry, basement bar midtown jazz,” Jazz Quarterly says of this track in particular — adding “yum” to further assert their point.

“Now that I am finally doing my thing, I do find it sad that they can’t see it. My mum is still around, but in a home with Alzheimer’s, so… She’s not really here, in most ways.”

“I Followed My Heart” and Fierce and Non-Compliant are available now.