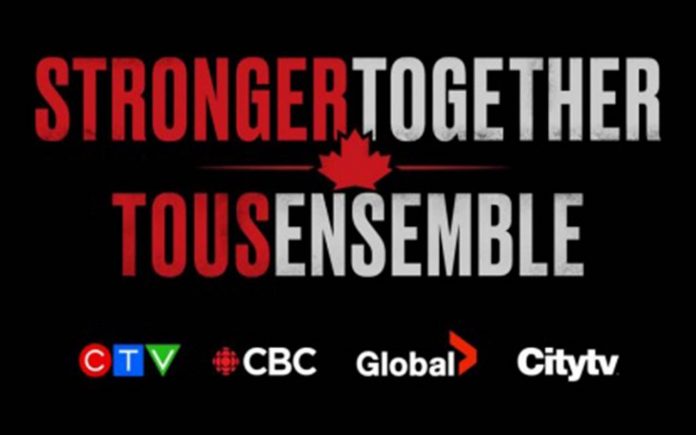 After incredible response and interest, the previously announced all-Canadian special, STRONGER TOGETHER, TOUS ENSEMBLE, has been extended to a 90-minute broadcast now airing 30 minutes earlier at 6:30 p.m. across all markets / 7 p.m. NT on Sunday, April 26. The event, in support of frontline workers fighting the battle against COVID-19, and Food Banks Canada, has become the largest single-show broadcast in Canadian history, with 10 additional broadcasters joining Bell Media, CBC/Radio-Canada, Corus Entertainment, Groupe V Média, and Rogers Sports & Media to present the star-studded, commercial-free broadcast, now available on an unprecedented 120 platforms.

Canadians who are able are invited to donate to Food Banks Canada in association with the broadcast to support local food banks from coast-to-coast-to-coast as they face the drastic impacts of COVID-19.

Featuring a mix of music, messages, and more, STRONGER TOGETHER, TOUS ENSEMBLE presents homegrown artists, activists, actors, and athletes sharing their stories of hope and inspiration in a national salute to frontline workers combatting COVID-19. Canadian talent are uniting to show everyone working on the front lines of this pandemic that we are all #StrongerTogether.

STRONGER TOGETHER, TOUS ENSEMBLE will air on at least 120 platforms, including live, simultaneous French translation on ICI ARTV, SériesPlus, VRAK, V, and Unis TV. The special can also be viewed on:

Viewers and listeners who are able are invited to support Food Banks Canada’s response to the COVID-19 pandemic. Food banks are concerned about the amount of food they have in stock as demand increases while food donations and volunteers decline rapidly. Funds raised as a result of STRONGER TOGETHER, TOUS ENSEMBLE will be used to source essential food and support items across the Canadian food bank network and support operational innovation, including creating alternative delivery systems to best serve people in need during COVID-19.