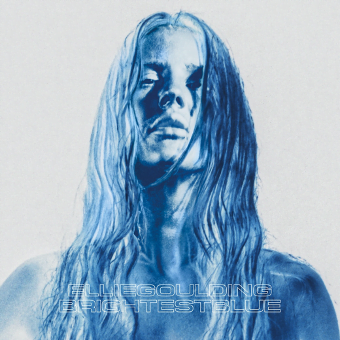 New album Brightest Blue, will include a number of recent releases alongside a plethora of new songs, with the album being set in two parts, Brightest Blue (executively produced by Ellie Goulding & Joe Kearns) and EG.0 respectively – see the full tracklist below. Across the two halves Ellie enlisted a number of writers and producers to help create the finished product, including the likes of Tobias Jesso Jr., Starsmith, ILYA, serpentwithfeet, Patrick Wimberly (of Chairlift) and Jim Eliot amongst others.

Explaining her thoughts behind the first half of the record Ellie explain that it “reflects my vulnerability… it acknowledges a complex world where relationships still dictate our happiness and heartbreak and can still be the most painful thing in the world, no matter how enlightened you are. The tracks also symbolize growing up and becoming a woman.” While the second half of the album “encapsulates my confident, brave and fearless side and features all my recent collaborations.” Ellie elaborates, “I often find myself writing about my thoughts and emotions in a way that I know will be catchy and memorable. I will always seek to use my voice in ways that no one would ever expect and look to collaborate with the least likely, exciting and eclectic group of other artists.”

New track “Power”, taken from the Brightest Blue part of the new record, was released last week alongside the stunning new video shot in lockdown.

Last month, Ellie was a featured performer in Global Citizen’s charity livestream, ‘One World: Together At Home’ which aired on the 19th of April and raised over £100 million for the WHO’s COVID-19 response fund. Just days later, she took part in BBC’s Big Night In programme as part of a celebrity cover of the Foo Fighters’ “Times Like These.” The charity single has since hit Number 1 in the UK, while the Big Night In saw 6.4 million viewers and raised £27 million for Children in Need.

This announcement comes after recent single “Worry About Me,” a collaboration with R&B artist blackbear, and further follows on from  releases such as “Close To Me” and “Hate Me” as well an Amazon Music exclusive cover of Joni Mitchell’s ‘River’ which saw Ellie claim her third UK #1 – becoming the last number one single of the decade.

Ellie, a UN Environment Ambassador, is known as a passionate advocate for environmental protection for our precious planet and champion of solutions to the climate crisis. She mixes this advocacy with her work to help end homelessness, supporting The Marylebone Project and fundraising for other nationwide charities working on the frontline of the homeless crisis.