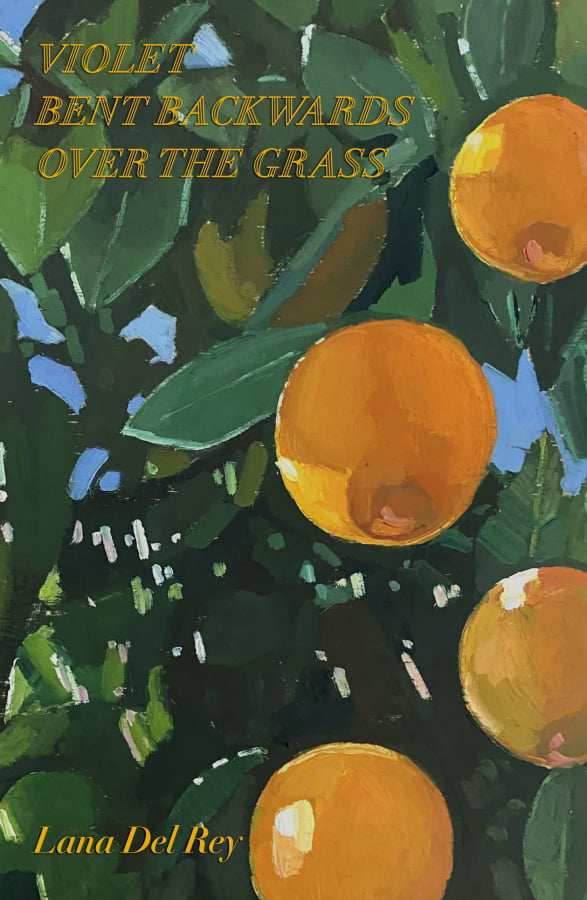 The collection features more than thirty poems, including Never to Heaven, The Land of 1,000 Fires, Past the Bushes Cypress Thriving, LA Who Am I to Love You?, Tessa DiPietro, Happy, Paradise is Very Fragile, Bare Feet on Linoleum, and many more. The beautiful hardcover edition showcases Lana’s typewritten manuscript pages alongside her original photography. The hardcover edition will be available on 29th September 2020.

In addition to the print book, Lana Del Rey brings her poetry to life in an unprecedented audiobook. In this spoken word performance, Lana Del Rey reads fourteen select poems from Violet Bent Backwards Over the Grass accompanied by music from her frequent collaborator, Grammy Award-winning musician Jack Antonoff. The spoken word album will be available on 28th July 2020 for electronic download from all major audiobook retailers. A vinyl pressing and CD of the spoken word performance will be available on October 2nd 2020 on Interscope / Polydor Records.

Lana Del Rey comments – “Violet bent backwards over the grass is the title poem of the book and the first poem I wrote of many. Some of which came to me in their entirety, which I dictated and then typed out, and some that I worked laboriously picking apart each word to make the perfect poem. They are eclectic and honest and not trying to be anything other than what they are and for that reason I’m proud of them, especially because the spirit in which they were written was very authentic. I’m happy to donate a substantial portion of the proceeds to go to some Native American organisations I have always wanted to donate to, because of the experiences that I’ve had which have greatly shaped my own life course.”

Del Rey’s sixth and most recent studio album Norman Fucking Rockwell was released last August to high praise, with Pitchfork calling her ‘one of America’s greatest living songwriters’ and it reached number one in the UK. The highly anticipated album was mainly produced and co-written with Jack Antonoff and includes previously released songs ‘Venice Bitch’, ‘Mariners Apartment Complex’, ‘Hope is a dangerous thing for a woman like me to have – but I have it’ and her hit cover of Sublime’s ‘Doin’ Time’. The album was nominated for ‘Album of The Year’ at the 2019 Grammys along with Song of The Year.

Her debut album, Born To Die, was released in January 2012 and charted at number one on the Official UK Album Chart and went on to win two Brit Awards, peaked number two on the US charts, and was the fifth best-selling album of 2012. Her extended play ‘Paradise’ followed that November, garnering her first Grammy nomination for Best Pop Vocal Album. Ultraviolence (2014), her third studio album, became her first album to reach number one in the US as well as in the UK. In 2015, she released her fourth studio album, Honeymoon. Both albums received positive critical response. Lana’s fifth studio album, Lust For Life, was released in 2017. The album received critical acclaim, and became her second album to reach No. 1 in the United States, and topped the charts in the UK while also reaching the top ten in almost every other country it charted in. The album was also nominated for Best Pop Vocal Album at the 2018 Grammys.