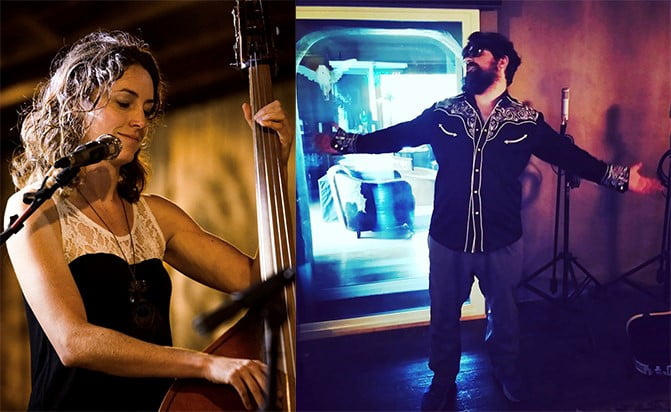 American alt-pop rockers The Light Workers have released a fresh, feel-good take on the inherent need to be free with their new single “Peppermint” — and debut self-titled album — available now!

While it’s often said ‘that thing’s bigger’n she is,’ Luna makes playing the upright bass look easy; her graceful yet hard driving work is often found mostly in the bluegrass and acoustic roots fields, and she’s recorded with the likes of Alan Munde, Kenny Maines, Amanda Shires, and more.

For his part, Woodward is also no stranger to the stage or stacked streams: his solo work has earned him more than 21,000+ plays across Spotify via 2017 album, Ramblin’ on the Coast Highway, and his forthcoming sophomore offering Epilogue is slated for release this Fall.

“As The Light Workers, our goal is to be a positive force in the universe through music, storytelling, and conveying the complexities of life through song,” Woodward shares. “We were only able to rehearse together just once in 2020 before we cut the release, but we were determined to write and record beautiful music even in the face of the pandemic.”

The result speaks for itself; produced by legendary engineer Ken Riley, The Light Workers features several stop-in-your-tracks original pieces, including Woodward’s heartfelt handiwork behind the evocative “The Tiny Blue Mountains” and memory-laden tribute to a friend who’s passed on in “Free Ride (For Jerry),” as well as Luna’s beautiful, moody ode to her man on “Jeremy.”

The album closes with a stunning cover of Neil Young’s cult classic, “Albuquerque” — which, when played in the New Mexico town, often surprises audiences as they’re unfamiliar with it, something The Light Workers aim to remedy — and opens with “Peppermint,” a track co-written with Luna’s bandmate from her other touring outfit, the Hard Road Trio. “This song was crafted surrounded by a tea party set and dress-up wardrobe,” she laughs, remembering the songwriting session. “The Hard Road Trio was on tour in March — just as COVID-19 was making headlines across the country — and I’d asked Steve Smith from that band to help me out with the song.

“We set up in his great-niece’s play room, and worked on giving it a different groove and adding more interest in the chorus and bridge.

“One of my favourite ways to get out of my head and past my inner critic to just get something on paper is an exercise I’ve adapted from author and teacher Natalie Goldberg,” she continues, crafting even earlier context for how “Peppermint” came to be. “I use props, which can be anything from small trinkets to photos, names, phrases, colours, tastes, smells, etc, as a starting point before setting a timer for two to five minutes. From there, the only rule is to keep the pen moving.

“I was leading this exercise at a songwriting camp and had passed around different essential oils,” Luna continues. “I took a whiff of peppermint and the first lines of the song came out onto the page.”

The seed of the story conjured up through the association of smell harkens back to Luna’s college days. “A friend and I were relating the smell of peppermint to signalling the beginning of Christmas break back when we were still in school. We said peppermint was like the ‘smell of freedom.’

“From there, the song is an observation of ‘stuckedness’ and wish for ‘her’ — which is me, you and everybody — to be our free, creative selves — ‘the way that it was meant to be.’

“I thought of times I have felt so stuck in life, wondering how I got there, and of times I’ve witnessed others creating their own cages. From the outside, it’s always easy to say ‘you have the key! Free yourself!’ But it’s harder to take our own good advice.”

“Peppermint” and The Light Workers are available now.