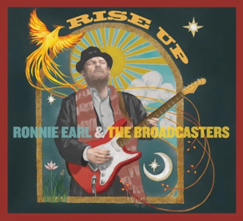 Ronnie Earl, a four-time Blues Music Award winner as “Guitar Player of the Year,” follows up the critical and commercial success of last year’s Beyond the Blue Door album with another blockbuster disc of music, Rise Up, set for release September 11 on Stony Plain Records. Created to heal and move bodies and souls alike, the majority of the album’s value-packed 15 tracks were recorded in “Living Room Sessions” at Earl’s house, with a vibe that puts the listener right in the room with Ronnie & The Broadcasters. A special bonus is the inclusion of several tracks recorded live from a set at a “Daryl’s House Club” show.

In Rise Up, Ronnie Earl & the Broadcasters —Dave Limina on keys, Diane Blue on vocals, Paul Kochanski on bass and Forrest Padgett on drums — take listeners on a journey through a wide swath of musical influences, Ronnie’s passions and concerns. Rise Up was created a bit differently than his other recordings. While recuperating from back surgery to alleviate a stubborn case of sciatica, Ronnie decided to hold the session at his modest home west of Boston. It took place in March, just before the coronavirus hit.

In a world of rampant commercialization, computer-derived music and diminishing standards, the 67-year-old continues to produce top-quality emotionally satisfying music his way, pleasing listeners and audiences wherever he goes. Rise Up is Ronnie’s 13th album on Stony Plain Records and 27th of his career. It’s another gem from a prolific artist who for over 45 years has created a deep lasting body of work.

“People tasked with having to describe Ronnie invariably note his passion,” writes guitarist Peter Ward (who also plays on the album) in his incisive album notes. ”It’s worth repeating because it’s true. Ever since he first appeared with Boston bands in the 1970s, Ronnie, wielding a Stratocaster and Super Reverb, has transfixed audiences with his distinct brand of emotion-laden blues. Still today, each time he performs he gives his audiences his all and shoots for the moon.

“Why give so much of oneself? In part, because it’s a gift to be shared. Blues musicians are lucky people and generally happy to be what they are. What they do pleases their listeners and satisfies a deep-down need in themselves.

“But with Ronnie it’s more. The world’s injustices weigh on his shoulders. Bigotry, substance abuse and struggle are never far from his mind. He offers his music to relieve people’s suffering, even if the elixir lasts only for the length of a song.

“On Rise Up, Ronnie and his talented Broadcasters create music of spontaneity, tradition, and deep feeling. Part of the session took place in his cozy living room surrounded by the things that give him joy — guitars, baseball cards, music and photographs of blues-artist friends of his. The setting was tranquil, but like any mission involving Ronnie and artistic creation, it comes with a healthy dose of danger, too.

“In Rise Up, Ronnie and his Strat lead a conversation with friends, tapping into humor and despair, coyness and brashness, anger and delight. Like the phone call, it’s person-to-person, and Ronnie’s the operator who makes the connection possible. On Rise Up he does it again, — happily — for you.”

The album includes a number of original Ronnie Earl songs, often saluting his friends and mentors, or about people who have made a significant impression on his musical and emotional development over the years.

The pain people suffer — depression, substance abuse and human indignity — is never far from Ronnie’s mind. And in 2020, he felt they needed to respond urgently to coronavirus and racial strife.

The lovely album cover, rendered by artist Tracy Kochanski, is poignant and apt. Debbie Blanchard, Ronnie’s friend and manager, said the painting shows the phoenix rising above Ronnie’s portrait, signifying that “humanity will rise up from these difficult times.”

“What Ronnie pulls from wood, wire and old Fender amplifiers,” music writer Ted Drozdowski once wrote, “isn’t so much notes as the sound of the human heart beating with you, crying under the world’s weight or acknowledging the inevitability of another sunrise.”

Perhaps being the son of two Holocaust survivors has given Ronnie Earl a keen insight into the human condition, which has manifested itself in his musical delivery. This year, Ronnie also celebrates more than 30-plus years of sobriety. He’s often quietly devoted his time and donated concert proceeds to help people affected by substance abuse. And as someone who once studied to be a special education teacher, he recalls with particular fondness a 10-year period when he volunteered at LifeLinks Inc., a nonprofit in Chelmsford, Mass. that helps people with intellectual and developmental disabilities.

Rise Up confirms Ronnie Earl’s status as one of the most soulful blues/soul/jazz guitarists working today.