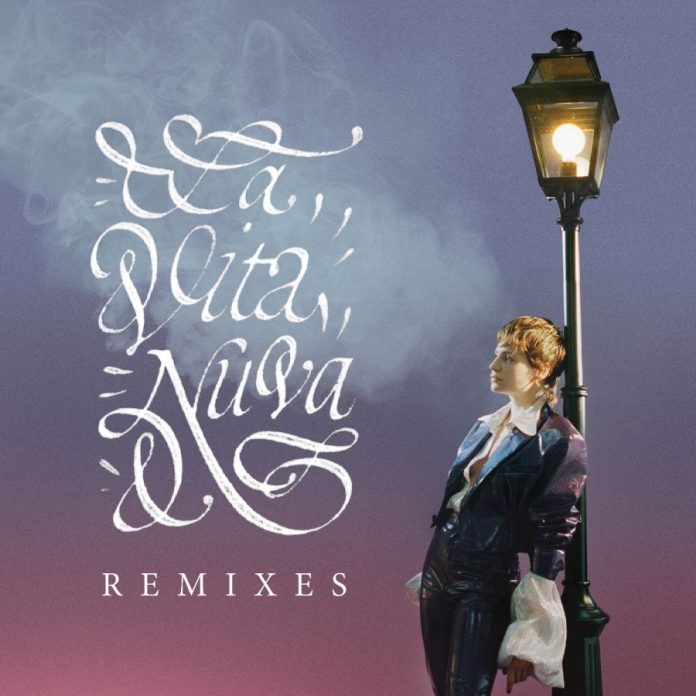 Sydney-born producer and DJ, Logic1000, applies her signature sound of UK-centric dance rhythms, hyper-accurate digital synths and disembodied textures to the original. Logic1000, aka Samantha Poulter has previously remixed for the likes of Låpsley and Don Toliver. Her eponymous self-titled debut EP has already racked up over 1.2 million streams and received the nod of approval by dance scene behemoths Four Tet and Carl Craig.

PC Music head honcho, A. G. Cook is known for his nightcore style amplifying the clichés of mainstream pop music from the 1990s-2000s and his ongoing collaboration with Charli XCX. Populous is a Queer activist and Italian DJ and beatmaker at Wonderwheel recordings. Real name Andrea Mangihas, his Last album ‘W’ is a tribute to free and diverse feminine musical imagery, taking rhythmic influences from around the globe.

The original is taken from her stunning 5 track La vita nuova EP and short film, which has received rave reviews and accolades for “Best Of The Year So Far-releases by NPR, Time, Billboard, The Ringer, Consequence of Sound etc.

La vita nuova arrives with an accompanying short film of the same name, imagined by Christine and featuring the EP’s five new songs in as many sequences. The 14 minute film is an inward journey that sees the artist invest Opéra Garnier, the world famous Paris opera house, filling it with stories of ghosts and mythical creatures. Through the lens of long-time collaborator Colin Solal Cardo (Robyn, Charli XCX) and with choreography by Ryan Heffington (Sia “Chandelier” VMA Award 2014, Grammy nominated), Christine and her dancers appear in succession on the Opéra rooftop, its grand stage and most secret recesses, culminating into a feverish moment with Caroline Polachek, a collaborator on the EP’s title track.

Chris has performed her single “People, I’ve been sad” live from her window in Paris for The Late Show with Stephen Colbert HERE, her track “I disappear in your arms” on The Tonight Show with Jimmy Fallon HERE. Besides producing and filming unique cover versions of The Weeknd’s “Blinding Lights” HERE, Travis Scott’s “Highest In The Room” HERE and Neil Young’s “Heart of Gold” HERE while in quarantine, Christine and the Queens participated in Global Citizen’s “One World: Together at Home” HERE to celebrate and support healthcare workers in the fight against the COVID-19 pandemic.

Chris was written, arranged, produced and performed by Christine and the Queens, and charted at #3 in the official UK album chart; it has been certified silver in the UK. Chris is the follow up to her already-iconic debut record Chaleur Humaine, released to near-universal acclaim in France in 2014, the USA as self-titled Christine and the Queens, selling more than 1.4 million copies worldwide to date.

Christine and the Queens received a GLAAD Media Awards nomination, her second nomination for International Female Solo Artist at the BRIT Awards 2019, was named Q Icon at the Q Awards 2019 and won the Artist Award at the Attitude Awards 2019. She starred in numerous artist, album and song of the decade lists.