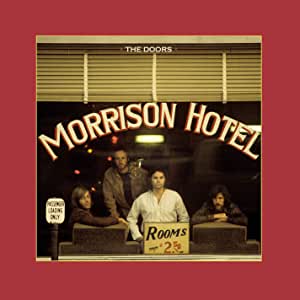 The Doors returned to their roots and were reborn a rock ’n’ roll band on Morrison Hotel, the group’s fifth studio album and fifth consecutive gold-certified record. Completed in only a few weeks and released in February 1970, the hard-charging album took its name from the Skid Row hotel in downtown Los Angeles that’s featured in the iconic cover photo taken by Henry Diltz.

To commemorate the album’s 50-year anniversary, Rhino checks in again at the Morrison Hotel with a 2-CD/1-LP set that will be available on October 9. MORRISON HOTEL: 50TH ANNIVERSARY DELUXE EDITION includes the original album newly remastered by The Doors’ longtime engineer and mixer Bruce Botnick, plus a bonus disc of unreleased studio outtakes, and the original album on 180-gram virgin vinyl. The music will also be available from digital and streaming services the same day. An unreleased take of “Peace Frog/Blue Sunday” is available now digitally.

For this new collection, the original album has been expanded with more than an hour of unreleased recordings taken from the sessions for Morrison Hotel. These 19 outtakes transport listeners into the studio with Jim Morrison, John Densmore, Robby Krieger, and Ray Manzarek for an unprecedented perspective on the making of the album.

Botnick says: “There are many takes, different arrangements, false starts, and insightful studio conversations between the band – who were in the studio – and producer Paul Rothchild – who was in the control room. It’s like being a fly on the wall.”

Several of these unheard recordings spotlight how “Queen Of The Highway” and “Roadhouse Blues” evolved across multiple sessions. It’s especially interesting to hear how the band played with different bass players on “Roadhouse Blues.” Early versions include Harvey Brooks, who played on the band’s previous album, The Soft Parade. Later takes feature guitar legend Lonnie Mack on bass along with The Lovin’ Spoonful’s John Sebastian on harmonica who, due to contractual restrictions at the time, had to be credited as “G. Puglese.”

Among the treasure trove of unreleased outtakes are also rough versions of Morrison Hotel tracks “Peace Frog” and “Blue Sunday,” as well as The Doors rarity “I Will Never Be Untrue.” The collection also captures some incredible session outtakes of the band jamming on cover versions of the Motown classic “Money (That’s What I Want)” and B.B. King’s “Rock Me.”

Veteran rock journalist David Fricke tells the tale behind this classic album in the set’s detailed liner notes. He writes: “As spring turned to summer in the last year of the 1960s, The Doors were a band in suspended animation. Singer Jim Morrison, keyboardist Ray Manzarek, guitarist Robby Krieger, and drummer John Densmore were off the road and in serious legal jeopardy after Morrison’s profane meltdown during a show at Miami’s Dinner Key Auditorium…The Doors were also exhausted and uncertain of their recording future after the protracted studio drama and uneven experiment of their fourth album, The Soft Parade…It was a season of chaos and anxiety. But The Doors were on the road to Morrison Hotel.”

A new line of official Morrison Hotel merchandise has also launched in celebration of the album’s 50th anniversary. Fans can visit www.thedoors.com for exclusive hoodies, sweats, socks, a t-shirt, a jean jacket, and a key chain from the Morrison Hotel.

Disc One: The Original Album

Side One: Hard Rock Cafe

Black Dressed In Leather (Queen Of The Highway Sessions)

Side One: Hard Rock Cafe