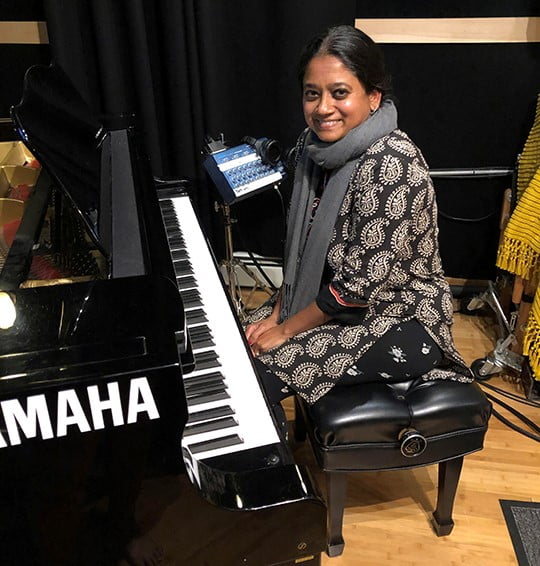 As the first female Indian American jazz composer to premier work at Carnegie Hall, multi-award winning artist Charu Suri continues to celebrate the launch of her most recent releases, The Book of Ragas and New American Songbook — available now!

The Book of Ragas is a completely original sound in jazz, using a jazz trio with a Sufi singer, which six-time GRAMMY Award winner Arturo O’Farrill has described as “singular.” New American Songbook, her nod to the more classic sound in jazz, was released in a double bill at Weill Recital Hall on Dec. 20th, 2019.

“The Book of Ragas is the culmination of a long journey to develop a new sound in jazz,” Suri shares. “It blends my beloved jazz trio idiom with the Carnatic ragas I grew up listening to in my childhood.

“I wanted to make it interesting and approachable,” she continues, adding that in India, ragas are meant to be played and performed at a certain time of day. “I wanted The Book of Ragas to be jazz-y, yet soulful with ghazals borrowed from the Sufi mystical tradition, so there’s also a layer of Sufi sounds.

“It was hard to achieve a fine balance between the band and singer, but I think, after many jam sessions, we did it. The lyrics, sung in Punjabi, are from timeless Sufi ghazals, and because the band was new to Indian rhythms and ragas, there was a bit of groundwork that needed to be achieved.

“New American Songbook is a quest for more nostalgia,” Suri contrasts. “It’s a more traditional way of looking at the jazz trio and vocal idiom.

“I grew up on Ella Fitzgerald and Billie Holiday, so I wanted these original songs to be a tribute and continuation of that timeless genre. New American Songbook was composed as an ode to nostalgia and a continuation of the trend.”

Charu Suri’s piece for chamber orchestra, The Shield of Achilles, was performed by the Princeton University Chamber Ensemble. As part of an atelier workshop with Toni Morrison at Princeton, two of her original pieces were performed by a chamber ensemble, along with cellist Yo Yo Ma and double bass player, Edgar Meyer.

The band consists of Charu Suri on the piano, J. Brunka on the double bass, Jay O’Brien on the drums and the vocal talents of Sufi singer Umer Piracha and Songbook vocalist Danielle Erin Rhodes. Formed in the spring of 2018, the ensemble has received praise from jazz critics and audience members for renditions of standards and original music.

She and her band are set to return to Carnegie Hall on July 3, 2021. In the meantime, Suri has been performing an ongoing series of wildly popular virtual concerts via her Facebook and Instagram accounts.

The Book of Ragas and New American Songbook are available now.