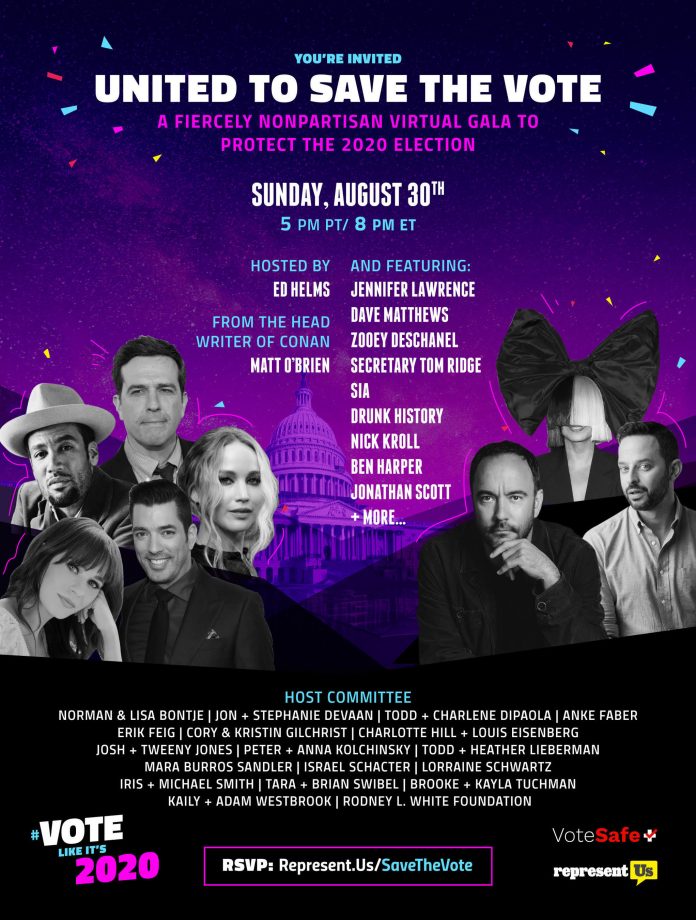 What does it take for Oscar-winner Jennifer Lawrence, Ed Helms, Zooey Deschanel, SIA, Dave Matthews, Nick Kroll, Comedy Central’s Drunk History, Property Brothers’ Jonathan Scott, George Lopez, Jake Johnson, Kenny G, Ben Harper, and former United States Secretary of Homeland Security Tom Ridge to get on one big Zoom call? It turns out the answer is voter access and safety. On Sunday, August 30th, these and other A-list entertainers are coming together to save the 2020 election and our democracy in United to Save the Vote, a one-of-a-kind, can’t miss night of original entertainment, music, and comedy. The virtual gala and fundraiser is hosted by fiercely non-partisan anti-corruption organization RepresentUs and cross-partisan coalition VoteSafe and will air live at 5:00 pm PT/8:00 pm ET.

Hosted by comedian Ed Helms, the event is free and open to the public. It will be an active, live fundraiser, with a goal of reaching $2M; attendees will be encouraged to make a gift during the event and supporters will be recognized. Interested attendees can RSVP Here.

American voters face unprecedented threats to casting their ballots safely and securely during November’s critical elections–from the ongoing pandemic to a dramatic shortage of poll workers to interference with the United States postal service, which undermines the security and validity of mail-in voting.

United to Save the Vote relays a vital strategy to protect the 2020 election and ensure it remains free and fair, interspersed between a fast-paced music and comedy variety show featuring A-list entertainers and musical acts, written by Matt O’Brien, head writer at Conan, and produced by leading Broadway producers and Tony Award nominees Tara Smith Swibel and Brian Swibel.

The live event aims to raise $2M for VoteSafe, a cross-partisan coalition chaired by former Homeland Security Secretary Tom Ridge(R-PA) and former Governor Jennifer Granholm(D-MI), that supports the principle that every American has the right to vote safely and securely in November by ensuring that every voter has access to secure mail-in ballots and safe, in-person voting sites. Meeting this goal will help VoteSafe increase trust in vote-by-mail and election results to fight the potential for any candidate to claim fraud or ignore election results, guaranteeing a peaceful transition to the next administration, no matter who wins in November.

About RepresentUsRepresentUs is the leading anti-corruption organization that is unrigging America’s broken political system. Co-Founded in 2012 by Josh Silver and Joshua Graham Lynn, they are leading a non-partisan movement of Americans dedicated to putting power back in the hands of the voters. Corruption and a rigged system have halted progress on the issues that Americans care most about, from healthcare to education to government spending.

Through the continued passage of state and local laws that fix our broken elections, fight against gerrymandering, stop political bribery, and end secret money, RepresentUs advocates for the federal passage of the bi-partisan American Anti-Corruption Act to restore a government that is once again by and for the people. To date, the movement has passed 114 transformative anti-corruption acts and resolutions in cities and states across the country—and in 2018 passed more anti-corruption reform than in any other year in America’s history.

For more information on RepresentUs and the strategy to unrig the system, visit represent.us.