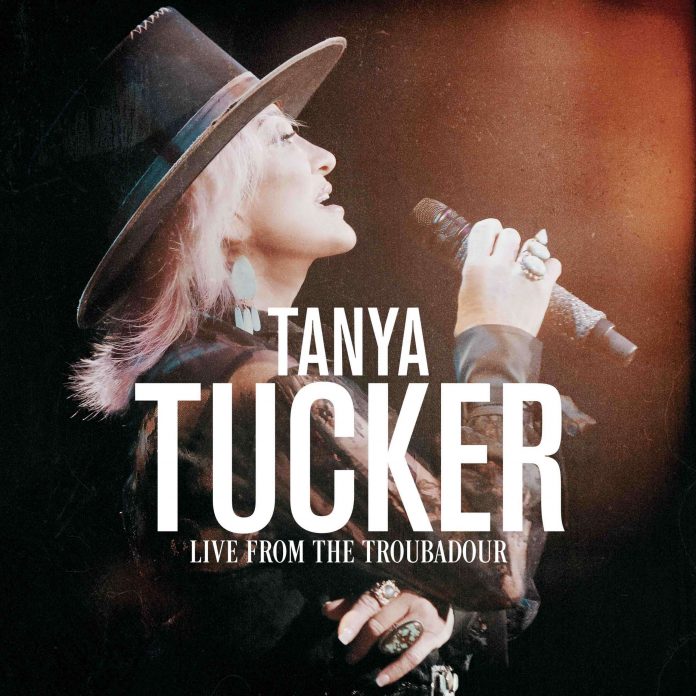 Legendary country music icon Tanya Tucker will release Live From The Troubadour on October 16, 2020, the one-year anniversary of Tanya’s historic, standing-room only set from which it originates. In October 2019, Tanya was in the midst of resurgent visibility and acclaim generated by her Brandi Carlile and Shooter Jennings produced album While I’m Livin’, released two months earlier – so the brief stand in front of the West Hollywood tastemaker crowd took on a palpable air of significance. P

“There are so many people and places hurting right now, and for me, being on the road since I was a kid and knowing these legendary venues like the Troubadour aren’t bringing in a dime right now without performances, it just makes sense to give back. I can’t be with the fans, so this is my love letter to them, a live album with some of those old records, and our new songs from While I’m Livin’,” shared Tanya.

“Tanya Tucker Brings Sensitivity and Classic Swagger to the Troubadour,” raved Variety’s Chris Willman (whose full-length review is included in the album’s liner notes.) “Her L.A. gigs showed how essential her new Brandi Carlile/Shooter Jennings-aided album is… and how rocking her touring show already was.”

Live From The Troubadour features 15 songs including Tanya’s smash first single “Delta Dawn,” and a cache of Tanya’s No. 1 country hits such as “Strong Enough To Bend,” “What’s Your Mama’s Name, Child”, “Blood Red and Goin’ Down” and “Would You Lay with Me (In a Field of Stone).” The set also includes a sublime medley of Bruce Springsteen’s “I’m on Fire” and Johnny Cash’s “Ring of Fire,” along with six songs from While I’m Livin’, including “Mustang Ridge,” “The Wheels of Laredo,” “Hard Luck” and the poignant, “Bring My Flowers Now.” The album, While I’m Livin’ and the song, “Bring My Flowers Now,” would, a few short months later, win GRAMMYs for Best Country Album and Best Country Song, the first GRAMMY wins of Tanya’s illustrious career.

The accolades haven’t stopped there. Tanya has also been nominated for three 2020 Americana Honors and Awards, including Album of the Year, Song of the Year and Artist of the Year. The awards will take place September 16th at Nashville’s legendary Ryman Auditorium.

As someone who’s been center stage for over 50 years, Tanya is donating a portion of the proceeds from the sale of this album directly to The Troubadour, including 100% of the revenue generated by the custom Live From The Troubadour poster available at Tanya’s online store, HERE.

The Troubadour is a member of NIVA: National Independent Venue Association. Formed at the onset of the COVID-19 shutdown, NIVA now represents more than 2,600 members in all 50 states and D.C. These independent venues and promoters were the first to close and will be the last to fully reopen. NIVA’s mission is to preserve and nurture the ecosystem of independent live music venues, promoters and festivals throughout the US.

Would You Lay With Me (In A Field Of Stone)
Jamestown Ferry
What’s Your Mama’s Name, Child
Blood Red And Goin’ Down
Strong Enough To Bend
I’m On Fire / Ring Of Fire (Medley)
Mustang Ridge
The Wheels Of Laredo
I Don’t Owe You Anything
High Ridin’ Heroes
Hard Luck
Interlude
Bring My Flowers Now
Texas (When I Die)
It’s A Little Too Late
Delta Dawn

^^CMT Next Women of Country: Bring My Flowers Now Tour
**with Brandi Carlile