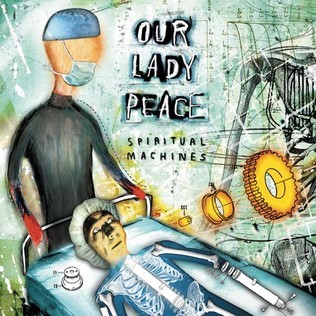 Four-time JUNO award winning group, Our Lady Peace, celebrates the 20th anniversary of their double-platinum album Spiritual Machines. To commemorate this alt-rock masterpiece, the group releases a remastered edition of the cult-favourite on Friday November 6th via Sony Music Entertainment Canada, and available on all streaming platforms. Additionally, selections from the Our Lady Peace Live DVD will be released on YouTube in high definition starting November 8th. Recorded in 2003, the concert features performances of “Life”, “Right Behind You (Mafia)”, “Are You Sad” and “In Repair”.

Originally released in December 2000, Spiritual Machines features many fan-favourite singles, including “In Repair”, “Life” and “Right Behind You (Mafia)”. These singles went on to become major Canadian rock radio hits, helping the album sell more than 200,000 copies in Canada alone. The animated video for “In Repair” won Best Video, Best Post-Production and Best Director at the 2001 Much Music Video Awards.

As the band’s fourth studio release, Spiritual Machines is a conceptual interpretation of non-fiction book written by futurist/inventor Raymond Kurzweil, The Age of Spiritual Machines. Kurzweil is featured throughout the album in spoken word vignettes in which he prophesizes the impact of artificial intelligence on the future of humankind.

“Spiritual Machines, our first attempt at a concept record, will always remain for me, a balance between, futuristic science and the heart of the human condition, says bassist Duncan Coutts. “We were extremely fortunate to get the opportunity to work with Ray Kurzweil, whose book, The Age Of Spiritual Machines, had us fascinated by the possibility of what the future could look like; but at the end of the the day, I think the album is comprised of more heart than science. Lyrically, songs like Life, In Repair and Are You Sad still hit me on an emotional level”.

While reminiscing about the inspiration behind the album, lead vocalist Raine Maida affirms, “Twenty years ago, Ray Kurzweil helped inspire Spiritual Machines. His futurist predictions reflected in the music and his recordings for the album, were 87% accurate. I still feel so honoured to have been a part of such a unique recording.”

In August 2020, Our Lady Peace announced a direct sequel, titled Spiritual Machines II, was in the works and planned for release in 2021.