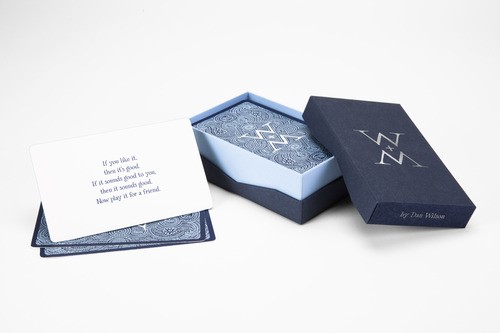 Today, the Grammy-winning producer and songwriter Dan Wilson announced the Words + Music in 6 Seconds deck, a set of 74 cards designed and written by Wilson distilling insights from nearly 30 years of writing, performing, and collaborating with the world’s most prominent musical artists and writers.

Pulled from his popular Words + Music in 6 Seconds instagram series, each individual card contains a brief and inspiring piece of advice for songwriters, musicians, and people in other creative fields. Designed to be a useful tool in sessions and collaborations, the deck is a beautiful and practical gift for the songwriter or creative artist in your life.

The deck is now available for purchase at a special introductory price. Each card was written and illustrated by Wilson himself, who published a book of his illustrations alongside his 2017 solo album Re-Covered.

“The idea came when I told a friend I was thinking of creating a book using the quotes from my W+M6S online series,” explains Wilson. “She said, ‘How about a deck of cards instead of a book?’ I said, ‘Oh, like Brian Eno’s Oblique Strategies deck?’ She said, ‘I don’t know who that is.’ Of course, I know who Brian Eno is, but I still loved the idea, and so I’ve tried hard to make sure the Words + Music in 6 Seconds deck is an entirely different animal than Eno’s studio-oriented advice cards.”

Wilson took home an Album of the Year GRAMMY for Adele’s 21, which featured three of his co-writes (including “Someone Like You”); landed a Song of the Year Grammy for The Chicks’ “Not Ready To Make Nice,” and has written with an eclectic range of artists such as Chris Stapleton, Phantogram, John Legend and Halsey. Earlier this year, Wilson recently reunited his band Semisonic for the release of You’re Not Alone, their first EP in 20 years. Watch the band perform “You’re Not Alone” on CBS This Morning’s Saturday Sessions.

“The W+M6S cards are about forging collaborative relationships, seeking a community, testing out ideas in front of an audience, and writing better songs. The world of collaboration is full of mystery for many of us, and the cards put a special emphasis on how to make the most of our time together in creative pursuits. I know those of you who use the deck will agree,” says Wilson.