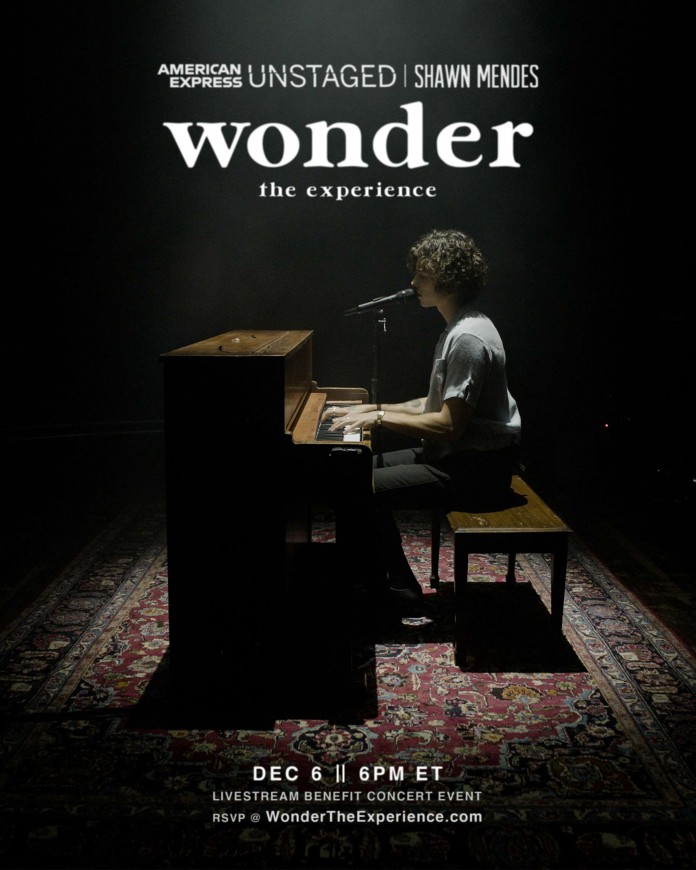 Today, GRAMMY nominated multi-Platinum singer/songwriter Shawn Mendes announced that on December 6th he will perform a livestream benefit concert, Wonder: The Experience, to celebrate the release of his highly-anticipated fourth studio album Wonder, which will be released on December 4th via Island Records/Universal Music Canada, the country’s leading music company. The livestream will feature music from the upcoming album, including the lead single “Wonder” and other yet to be released songs.

You can pre-order the new album, and enter for a chance to win a Wonder Golden Ticket Package (including signed items and virtual group Meet & Greet with Shawn) here.

Wonder: The Experience is the 2020 finale of the American Express UNSTAGED series, and is the final of Shawn’s Wonder Residencies, which also included performances on The Tonight Show Starring Jimmy Fallon and BBC Radio 1’s Live Lounge.

Fans can RSVP to attend the livestream free here, with an option to donate to the Shawn Mendes Foundation, a sponsored program of the Social Impact Fund (a 501(c)(3) charitable organization). American Express Card Members can purchase exclusive ticket packages with behind-the-scenes content, virtual group meet & greets, exclusive merchandise, and more. A portion of each American Express ticket package sold will be donated to the Shawn Mendes Foundation to help support and amplify the voices of young leaders driving positive change.

Additionally, Shawn Mendes and longtime manager Andrew Gertler partnered with Netflix to release “IN WONDER” globally on November 23. The debut feature length documentary, a TIFF special event selection, from acclaimed music video director Grant Singer (The Weeknd, Lorde, Sam Smith), is a portrait of Mendes’ life, chronicling the past few years of his rise and journey. Executive produced by Andrew Gertler, Shawn Mendes, & Ben Winston; produced by Saul Germaine, p.g.a and James Haygood. Mendes and Gertler produced the film under their newly announced film and television production company Permanent Content, which will develop scripted and documentary projects “focused on issues that impact or are important to today’s youth.”

GRAMMY nominated Toronto born multi-platinum singer/songwriter Shawn Mendes released his highly anticipated self-titled third album in May 2018. The certified platinum album debuted at #1 on the Billboard 200 Chart as well as multiple additional worldwide markets. It shot to #1 on iTunes in more than 80 countries immediately upon release. The album became one of the top best-selling album debuts of 2018 and made Shawn the third youngest solo artist to ever have three consecutive #1 albums. Shawn was nominated in two categories for the 61st annual GRAMMY® Awards, including “Song of the Year” for “In My Blood” and “Best Pop Vocal Album” for SHAWN MENDES. Most recently, Shawn was nominated for a GRAMMY for “Best Pop Duo/Group Performance” for his single with Camila Cabello, “Señorita.” The song debuted at #1 on iTunes worldwide and broke Spotify’s record for the biggest debut from a male/female duet in its history, going on to become the most streamed song on Spotify in 2019. The hit nabbed the #1 spot on Billboard’s Hot 100 Chart as well as #1 at Top 40 & Hot AC Radio. Last summer Shawn debuted his certified platinum single, “If I Can’t Have You,” at #1 on iTunes and #2 on the Billboard Hot 100 chart. With “Señorita” at #1 and “If I Can’t Have You” at #2, Shawn is the first male solo artist ever to simultaneously hold the #1 and #2 place on the Top 40 chart. In April 2017, Shawn released his 3x platinum hit “There’s Nothing Holdin’ Me Back.” The track scored Shawn his second #1 single at Top 40 radio and on Billboard’s Pop Songs chart, joining his 7x platinum single “Stitches.” Throughout his career, Shawn has achieved 3 consecutive #1 album debuts, 3 platinum albums, and 11+ consecutive platinum and multi-platinum singles. Worldwide, he has sold over 20 million albums, 175 million singles, and has amassed over 31 billion strong streams and over 8 billion YouTube views. Shawn has completed two sold-out world tours with over one million tickets sold, selling out legendary stadiums and arenas including NYC’s Madison Square Garden and London’s O2 Arena in minutes. On his most recent tour, he sold out his first ever stadium show in minutes at Rogers Centre in his hometown of Toronto. The tour began in March 2019, with over 100 dates across the UK, Europe, North America, Latin America, Asia and Australia/New Zealand. Shawn has nearly 50 Billion global streams and 8.6 billion video views. He topped Billboard’s “21 Under 21” in 2017 and 2018 and has been featured on Forbes “30 Under 30,” Spotify’s “25 Under 25,” and Time Magazine’s “Time 100 Most Influential”. In 2018, ROI Influencer Media recognized Shawn as the #1 Most Influential Artist and #1 Most Influential Teen across all social media platforms.

In 2019 Shawn launched The Shawn Mendes Foundation, which seeks to inspire Shawn’s audience, the youth generation of today—to learn about those causes that they are passionate about, and help empower them to use the voice they have to bring change to the world by taking action & giving back. As part of its ongoing mission, the Foundation provides resources and support to amplify the voices, messages, and platforms of young leaders driving positive change.