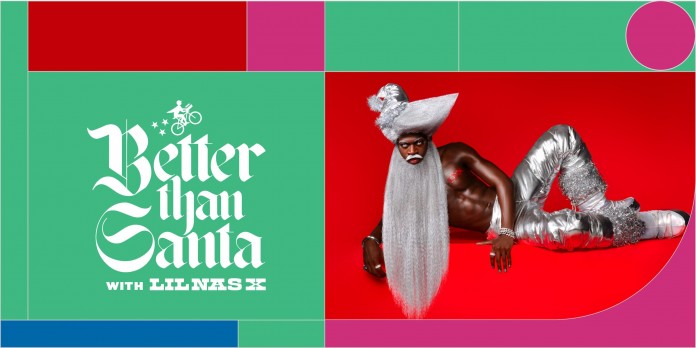 Postmates’ fourth annual #BetterThanSanta is here, starting tonight at 5 pm PST, and in the spirit of giving, Postmates is again granting as many holiday wishes submitted through Twitter as possible. But this year, Grammy Award-winning artist Lil Nas X will be Postmates’ first-ever Co-#BetterThanSanta as he trades in his cowboy hat for a Santa hat to help make people’s wishes come true. Fans can also tune into Monday Night Football tonight to catch a special #BetterThanSanta message from Lil Nas X and Postmates.

“Helping to bring joyful vibes to people this year is really important to me, and I’m super excited to join forces with Postmates to grant people’s holiday wishes this year with #BetterThanSanta,” said Lil Nas X. “We’re kicking things off today by Postmating some lunch from Hotville Chicken to Covenant House LA. With everything going on in the world, it’s important to me now more than ever to support the youth in my community.”

In addition to granting people’s wishes with #BetterThanSanta, Lil Nas X is helping people get into the holiday spirit all season long with his hit song, “HOLIDAY,” which has accumulated over 100 Million audio and video streams worldwide. The song was co-produced by Take A Daytrip and Tay Keith, and marks Lil Nas X’s first offering from his forthcoming debut album. Nas has also released the song’s cinematic and over-the-top official music video, which he co-directed with acclaimed director and creative Gibson Hazard. Set on Christmas Eve of the year 2220, the video follows Nas through his futuristic North Pole workshop where he takes on the role of four different characters, including Santa Nas X.

Like Lil Nas X, Postmates loves delivering joy for the holidays. Last year, so many people submitted wishes that #BetterThanSanta was trending on Twitter in the U.S. and Postmates granted all kinds of wishes including Lisa who asked for laptops to be sent to her sister, a teacher who needed them for her students. In 2019, celebrities also got wind of #BetterThanSanta including Miley Cyrus who asked to gift youth at the Happy Hippie Foundation with some goodies for the holidays and Carly Rae Jepsen who wished for Postmates to send books to kids at Children’s Hospital in LA; and Postmates delivered on both and more.

This year, tweet your wildest wishes at Postmates and Lil Nas X here or just follow these directions: