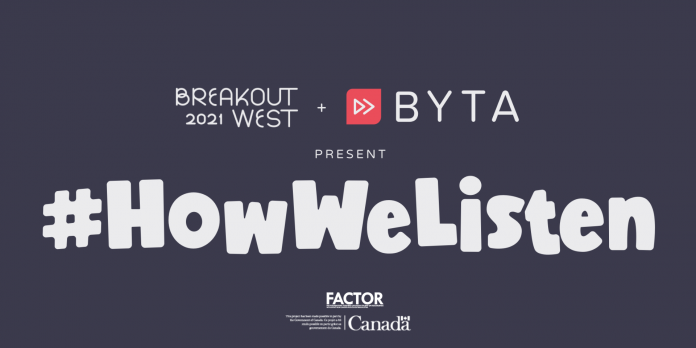 The Western Canadian Music Alliance (WCMA) and BreakOut West, Western Canada’s largest music industry event, and Byta, the platform for securely sending digital audio files and streams, are excited to announce that they will partner to present a five part series titled #HowWeListen. Beginning in January 2021, these will be conversations focused on music discovery with representatives from within the music industry. Five discussions, each focusing on different genres of music creation: Folk, Country, Hip-Hop, Francophone and Rock/Indie.

How industry insiders listen to and discover new music is one of the most important things for artists and their teams to understand. These are the insights artists require in order to properly craft pitches and to target how potential audiences might hear about them.

The #HowWeListen series is scheduled to launch January 27 at 11 a.m. CT, with the first panel focusing their attention on Indie Rock music. Each month BreakOut West and Byta will present a new panel discussion with the last and fifth instalment taking place in April.

This is a great opportunity to help you start building a stronger and more effective strategy, no matter the style of music you create or work with.

The Western Canadian Music Alliance is a pan western organization created by the Music Industry Associations (MIA’s) of British Columbia, Alberta, Saskatchewan, Manitoba, The Northwest Territories, the Yukon Territory, to promote and celebrate western Canadian music. WCMA, with the financial support of each provincial and territorial government partner, FACTOR, the Government of Canada and of Canada’s private radio broadcasters, WCMA annually hosts their core artist and industry development event, BreakOut West. The event is held in a different western Canadian city on a rotational basis and is the prime music industry event in western Canada. BreakOut West 2021 will be held October 13-17 in Winnipeg, MB, including a four-day music conference, a three-night multi-genre music festival and the Western Canadian Music Awards and Industry Awards programs.

WCMA’s head office is in Winnipeg. We recognize the ancestral lands, from Treaty One Territory, the original lands of Anishinaabeg, Cree, Oji-Cree, Dakota, and Dene peoples, and the homeland of the Métis Nation.

Byta (“Bee-tah”: the Swedish word for exchange) is run as a distributed team across three continents. Byta is unrivaled in taking advantage of the unique properties found in audio files – reading and writing file metadata, converting file formats and delivering fast yet secure streaming. Byta recently launched their #HowWeListen not-for-profit, dedicated to providing musicians and their teams with the knowledge required to move their careers forward.