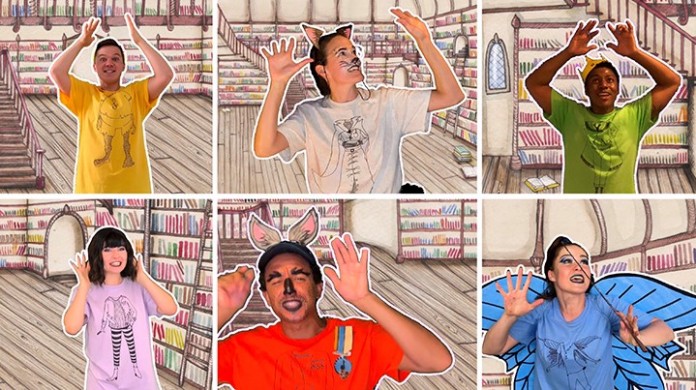 The Land of Once Upon a Time is all abuzz; who will create the best song to save the Treasury of Tales? Acclaimed new musical fairy tale series Outta The Books concluded its first season this week with its seventh episode — available now!

Written by Canadian media icon Erica Ehm, the season one finale sees the librarian at the Treasury of Tales choose the winner of the “Once Upon A Tune Talent Contest.” But will the contestants themselves unfairly influence her decision? Only those who tune in to Outta the Books will find out.

Featuring an international team of musicians, producers, and actors, Outta The Books launched as a multi-platform entertainment series in November 2020. Originally set for a theatrical debut at the 2020 Edinburgh Fringe Festival, the StorySongs creative team pivoted once the pandemic hit, and Outta the Books is now an entirely virtual multimedia experience for kids and families.

Outta The Books harnesses the power of music, the most universal of communicators, to tell simple, time-tested and meaningful tales, one StorySong at a time. Characters inspired by familiar fairy tales and fables come to life as they keep stories alive through song.

Alas, the world has nearly forgotten the joy and power of time-tested stories, and so The Librarian of the Treasury of Tales decides the best way to keep them alive is through music. She organizes a talent search, which attracts a motley crew of characters who perform their original songs, each based on a classic tale like Cinderella, Sleeping Beauty, the Ugly Duckling, Emperor’s New Clothes, the Tortoise and the Hare, Snow White, and more. Some of the contestants are shy (the Blue Fairy), some are a little bit wicked (the witch Trixie and the wolf C-Major), some very talented but hopelessly vain (Prince Pollywig), and two are so talentless and self-involved that they are disqualified from the competition (Warble the Ogre and Princess Euphony).

StorySongs and Outta the Books are the brain children of award-winning composer and producer Brian Banks. Banks assembled an accomplished cast of theatre actors, including star Karl Queensborough (“C Major,” who comes from a line of Big Bad Wolves) and Carl Spencer (Prince Pollywig) from the current cast of the London production of “Hamilton” and others based in Britain, Canada and the United States. The Librarian (Annie Kirkman, an accomplished Yorkshire based musical theater actor and producer) hosts each episode.

The show has evolved into a cooperative, creative lockdown production, with Banks in Los Angeles, director Neil Fisher in Liverpool, and writer Erica Ehm in Toronto, with all involved in every shoot remotely via Zoom.

Singles from Outta the Books have been released, and the full cast recording will be available from all music sources on February 26th (which happens to be National Tell a Fairy Tale Day). A new season of Outta the Books adventures is in pre-production, and a podcast and children’s book are in the works.