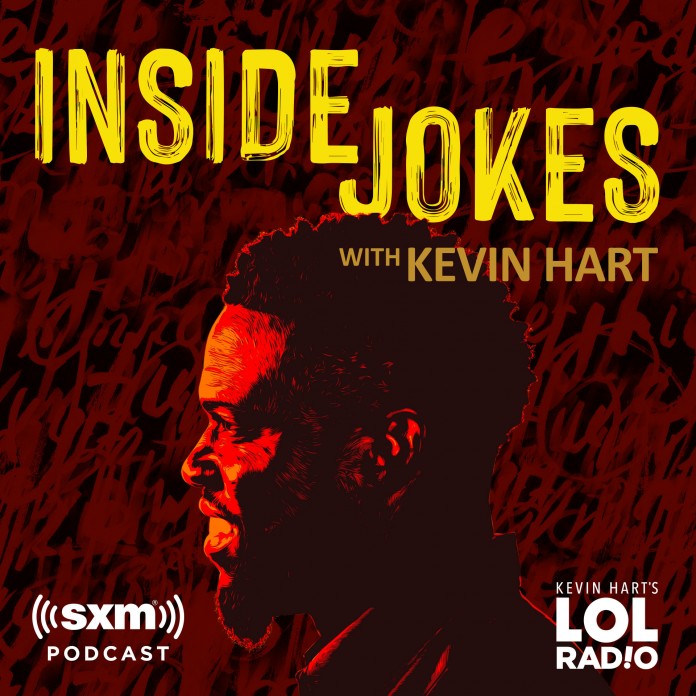 oday SiriusXM and Laugh Out Loud, the multi-platform comedy brand founded by Kevin Hart, announced the launch of three new original programs including the debut podcast from Hart, Inside Jokes with Kevin Hart. The news was first shared this morning on SiriusXM’s The Howard Stern Show. Hosted by the megastar actor and comedian, Inside Jokes will feature Hart in conversation with fellow top comics, including one of the biggest names in comedy history, Jerry Seinfeld, as the inaugural guest. The podcast airs this evening at 8:00pm ET on SiriusXM’s Laugh Out Loud Radio channel 96, and is available now on the SiriusXM app, Pandora, Stitcher, and wherever listeners access podcasts.

Known for its unfiltered, relatable, and hilarious content, Laugh Out Loud’s expanded audio slate continues to push forward the company’s mission of “getting the world laughing together,” through authentic and culturally relevant series that showcase innovative and groundbreaking multicultural voices moving the needle forward in comedy.

Available now, the Inside Jokes podcast brings audiences into an intimate conversation between Hart and some of the world’s funniest people for “ear-opening” dialogue, never-before-heard stories, hilarious moments, and of course, “inside jokes.” Following the series premiere with Jerry Seinfeld, the star-studded guest lineup slated for the coming weeks includes: Steve Harvey, Bill Burr, Zainab Johnson, Cedric the Entertainer, Desus & Mero, Nick Kroll, Hasan Minhaj, and others. New episodes will premiere Wednesday nights at 8:00pm ET exclusively on Laugh Out Loud Radio channel 96 and will subsequently be released as a podcast. Click here to listen to Jerry Seinfeld reveal which comedian would be on his “Mt. Rushmore” of the greatest comics in history.

“I’m sitting down with some of the best voices in comedy to give my listeners the stories behind the jokes they hear on stage. Comedians have been through it all, and I’m excited that I’ll be digging deep into the lives of my peers for my first podcast,” said Chairman of Laugh Out Loud and Inside Jokes host Hart. “I also think our fans will love the slate of new LOL programming on SiriusXM and can’t wait to introduce audiences to the dynamic talents of Jazzy, Chris, and Vanessa.”

“The only thing funnier than Kevin Hart is Kevin Hart in conversation with another comedian,” said Scott Greenstein, President and Chief Content Officer, SiriusXM. “I’m excited to present our Inside Jokes podcast to listeners across the globe, in addition to the new shows on SiriusXM, as we continue to collaborate with Laugh Out Loud to shape Kevin’s channel into the pinnacle of diverse comedy programming in audio entertainment.”

In addition to Inside Jokes, Laugh Out Loud continues to expand its audio slate on SiriusXM with the debut of two new shows: The Ladies Room with Jazzy, a roundtable-style program led by comedian and actor Jasmin Brown alongside four of her closest (and most hilarious) friends, Natalie Friedman, Briana Lawrence, Renita Woodland, and Kiya Roberts; and Date Night with Chris and Vanessa, the weekly series where married couple actor and writer Chris Spencer (Jimmy Kimmel Live, Don’t Be a Menace) and casting director Vanessa Spencer (Entourage, Be Cool)  invite couples on a date night to unpack the issues everyone faces in relationships and family life. Ladies Room premiered January 25, with new episodes dropping Mondays and Wednesday at 7:00pm ET, while new episodes of Date Night air Fridays at 7:00pm ET, both exclusively on SiriusXM and the SiriusXM app.

“At Laugh Out Loud, audio has been a key area of growth for us. Through our relationship with SiriusXM and presence across their multi-platform ecosystem (SiriusXM radio and streaming, Pandora and Stitcher) we’ve been able to continue expanding our audio business to meet the demands of listeners,” said Thai Randolph, President and Chief Operating Officer of Laugh Out Loud. “We’re committed to our mission to deliver comedy in color whenever, wherever and however our audience wants to laugh. Through our expansion with SiriusXM we are able to create more dynamic audio experiences via radio shows, podcasts, special listening events and more.”

Inside Jokes, The Ladies Room, and Date Night join Laugh Out Loud Radio’s lineup of wildly popular shows, including Quake’s House and Straight From The Hart, the latter of which is one of Pandora’s top podcasts across all genres. The full original content slate is below, and more information can be found online at SiriusXM.com/KevinHart.

DATE NIGHT | Fridays at 7:00pm ETEvery week Chris and Vanessa invite couples (and sometimes single folks) on the show for a fun date to unpack the issues we all face in relationships and family life. Date Night with Chris and Vanessa combines comedy and expert insight to delve deep into the complexities of relationships for a show that brings an engaging blend of newsworthy issues, thought provoking ideas, and comedy with a purpose. #DateNight

INSIDE JOKES | Wednesdays at 8:00pm ETDive into the minds of some of the world’s funniest people with Kevin Hart in his new podcast, Inside Jokes. From rising stars to comedy legends, Kevin will pair with comedic tastemakers for “ear-opening” dialogue that takes listeners on a wild ride through some of the world’s top comedic minds. From chronicling their comedy club experiences to never-before-heard stories, each episode promises to be packed with punchlines, anecdotes, and of course, “inside jokes”. #InsideJokes

THE LADIES ROOM | Mondays & Wednesdays at 7:00pm ETJazzy and four of her favorite girlfriends gather together to spill tea, kiki, and disagree, about every issue under the sun from a fully female perspective!  No topic is off-limits, and nothing is censored. These are the conversations that women have been dying to share, and men can finally eavesdrop on!  Each coming from different walks of life, these five funny females are having the ultimate meeting in The Ladies Room, and you don’t want to miss it! #LadiesRoom

STRAIGHT FROM THE HART | Tuesdays & Thursdays at 7:00pm ETEach week comedian and actor Kevin Hart and the Plastic Cup Boyz — Joey Wells, Na’im Lynn, and Will “Spank” Horton — come together to talk life, comedy, and the world as they see it. #StraightFromTheHart

Kevin Hart’s Laugh Out Loud Radio is available to listeners nationwide on SiriusXM channel 96, the SiriusXM app, and at home with Amazon Alexa, the Google Assistant, or however they stream in their house. Streaming access is included for most subscribers. Go to www.siriusxm.com/ways-to-listen to learn more.