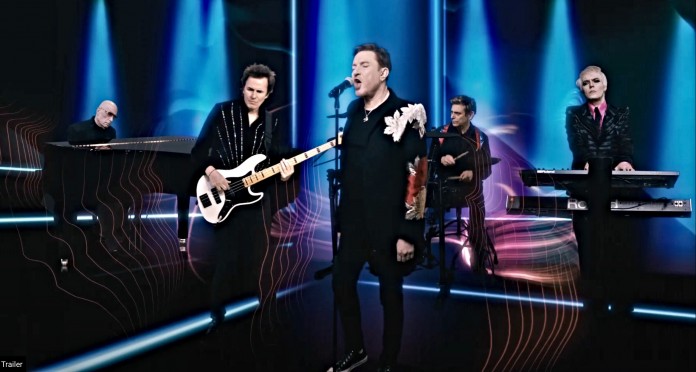 SiriusXM and Pandora announced today the launch of two new talk and music programs for 2021 that delve into the music, career, and influence of Duran Duran, the iconic, global super band whose work now spans four decades.

Duran 40 on Pandora features the band’s biggest hits and fan favorites from across their career, gathered in a new original format merging music and talk. The collection includes all four band members along with special guests providing commentary on the making of, and inspiration behind the music. Special guests Mark Ronson and Nile Rodgers will join Duran 40 as they share personal memories and stories about Duran Duran’s body of work. Pandora’s Duran 40 will be hosted by the BBC’s Claudia Winkleman; the program will be available exclusively via Pandora starting January 28, with broadcast versions airing on SiriusXM’s Volume (channel 106) and First Wave (channel 33).

Additionally, Duran frontman Simon Le Bon will host WHOOOSH! beginning January 27 at 9 PM ET exclusively on SiriusXM’s Volume channel. WHOOOSH! is a weekly music show featuring Le Bon chatting and playing some of his favorite records including new discoveries. Le Bon is joined by Duran insider and band associate Katy Krassner as they discuss their latest song obsessions and new music that excites them. WHOOOSH! first debuted on Duran Duran’s website in 2020, and now moves exclusively to SiriusXM with all new programs in 2021 airing on the Volume channel and as a new podcast.

“It all began as a lockdown thing,” said Simon Le Bon. “It dawned on me that the only music I was listening to was what I was working on, and the stuff that got me into a band in the first place. So I switched on my ears, and went on a trip down a sonic rabbit hole. What a revelation – there is so much great new talent, so much music out there. Katy is the foil that makes it all work. And so a radio show is born. WHOOOSH! – it’s the sound of your mind expanding to take on a new idea.”

“Duran Duran is one of the most influential bands of the last 40 years, and we are thrilled to welcome Duran 40 and WHOOOSH! on Pandora and SiriusXM for our listeners,” said Scott Greenstein, President and Chief Content Officer of SiriusXM. “Their hit songs, iconic videos, and extensive music catalog have been embraced by multiple generations of fans who can now hear the music and the great stories behind them from the band members themselves and an array of truly special guests.”

As 2021 marks the 40th anniversary of the band’s debut album release, internationally acclaimed, multi-platinum selling, award-winning pop legends Duran Duran will return to the stage this summer for a handful of live dates in the UK and Europe. The band recently released a poignant and highly praised tribute cover of David Bowie’s ‘Five Years,’ in honor of what would have been Bowie’s 74th birthday (listen here). On Thursday, January 28, Duran Duran’s new music video for ‘Five Years’ will premiere on YouTube at 12 PM ET. Watch HERE. Immediately prior to the video premiere, keyboardist Nick Rhodes will appear on the band’s Instagram Live answering questions with fans, after which bassist John Taylor will host a live Q&A on the band’s YouTube channel.

SiriusXM listeners can find WHOOOSH! on the Volume channel on their SiriusXM radios and can listen to it as a podcast on the SiriusXM app. Streaming access is included for most subscribers. Go to www.siriusxm.com/ways-to-listen to learn more.

Duran 40 joins Pandora’s extensive roster of exclusive programming including Pandora Stories, Wake Up!, Listen In, Game Time, and more. Pandora Premium subscribers can listen to Duran 40 on-demand, and Pandora ad-supported and Plus listeners can do so via Premium Access after watching a 30-second ad. For more information on Pandora Premium, go to www.pandora.com/upgrade/premium.