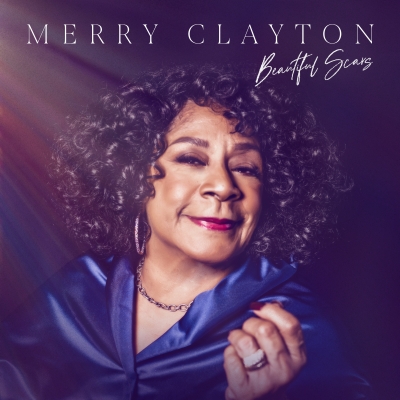 Now, following a tragic accident that severely altered her life but couldn’t dampen her incredible spirit, Merry Clayton — one of the most acclaimed and recognizable voices of all time — finds redemption and strength in the power of gospel music on her new album Beautiful Scars, out April 9th on Motown Gospel/Capitol Records. Pre-orders are available on March 12th.

Co-produced by lifelong friend, Grammy Lifetime Achievement Award recipient, and Rock & Roll Hall of Famer Lou Adler, and legendary Gospel vocalist, instrumentalist and songwriter Terry Young, Beautiful Scars brings Merry back to her roots, growing up singing at New Zion Baptist Church in New Orleans, her father Reverend A.G. Williams Sr. Clayton’s parish. Merry’s early, formative experiences there cultivated her incredible voice, and established her faith – two gifts that have sustained her throughout her life’s journey. Recorded at Henson Studios (formerly the famed A&M Studios where many of Merry’s most historic sessions took place) in Hollywood, Beautiful Scars finds Merry emboldened by His Word, mercy and eternal love — it’s the most heartening and human record she has ever made.

While the inspiring music takes center stage, the story behind Beautiful Scarswas born in tragedy. In 2014, mere months after 20 Feet From Stardom — the phenomenal film in which she stars — won the Oscar for Best Documentary, Merry was involved in a devastating car accident that claimed both of her legs, requiring a five-month hospital stay and four years of diligent rehabilitation.

Merry began discussing the possibility of recording again with Lou Adler while still in the hospital. “I’ve been through the fire and the rain, but I made it through,” she recalls saying. “I want people to know that there is healing and deliverance through anything. But you’ve got to trust God — put yourself in His hands.” To which Adler responded: “That’s all I needed to hear. We’ve got to get you some songs!”

Those songs include new compositions written by Coldplay’s Chris Martin and Terry Young (“Love Is A Mighty River,” the final version of which includes Martin’s original piano and vocal demos) and Diane Warren (the stunning title track “Beautiful Scars”), covers of classic songs by Sam Cooke and Leon Russell, and five original songs from Terry Young, who alongside Adler played an integral role in guiding Merry’s creative vision.

One of the album’s most emotional moments comes in the form of an updated version of the Leon Russell classic “A Song for You.” A reprisal of a song Merry sang on her 1971 album, it incorporates a vintage solo recording by her late husband, legendary saxophonist Curtis Amy, who passed away in 2002. After looking back, Merry concludes the album on a hopeful note with “Ooh Child Medley,” a moving finale featuring vocal accompaniment from her granddaughter Kyliyah.

After overcoming her accident that included a five month hospital stay and four years of diligent hard work in rehabilitation, Merry is ready to grace the world with her talents once again in a project flowing with emotion, triumph and tenacity. A document of resilience, joy, and most importantly faith, Beautiful Scars has Merry back doing what God put her on earth to do: sharing her revelatory voice with the world.