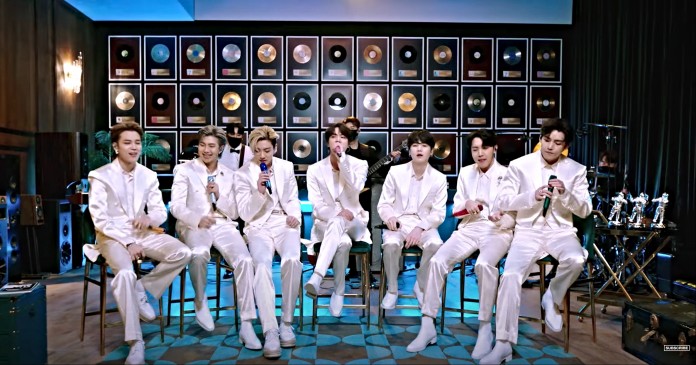 MTV today announced Grammy-nominated group BTS is set to perform a special edition of its trailblazing and award-winning MTV Unplugged franchise, “MTV Unplugged Presents: BTS.” The worldwide music event will build off the iconic series with a fresh new take Tuesday, February 23 at 9PM ET exclusively on MTV in the US, and will air around the world beginning February 23.

BTS will bring its own iteration of the iconic Unplugged format to life straight from Seoul, South Korea – offering their fans a front-row seat to never-before-seen versions of the group’s most career-defining hits and songs from their latest album BE (Essential Edition), in intimate settings. BE, first released as the Deluxe Edition last November, peaked at No. 1 on the Billboard 200 chart. The album includes the No.1 hit singles “Dynamite” and “Life Goes On”.

Together, MTV and BTS have created some unforgettable moments and performances, including the group’s debut on the VMAs stage in August, where they performed the first broadcast performance of “Dynamite,” before racking up wins for Best Pop, Best Group, Best K-pop and Best Choreography to bring their career total to six VMA wins. The group also celebrated their first-ever live appearance on MTV’s Fresh Out Live in February 2020 for the release of MAP OF THE SOUL: 7.

Last Fall, Miley Cyrus put her own spin on the series’ traditional format with MTV Unplugged Presents “Miley Cyrus Backyard Sessions.” In Spring 2020, MTV launched “MTV Unplugged at Home” to coincide with the launch of #AloneTogether, a global talent and social media-driven campaign to educate young people on the importance of social distancing in order to flatten the curve of the coronavirus.

BTS, an acronym of Bangtan Sonyeondan or “Beyond the Scene,” is a South Korean boyband that has been capturing the hearts of millions of fans globally since their debut in June 2013. The members of BTS are RM, Jin, SUGA, j-hope, Jimin, V, and Jung Kook. Gaining recognition for their authentic and self-produced music, top-notch performances, and the way they interact with their fans, the band has established themselves as global superstars breaking countless world records. While imparting a positive influence through activities such as the LOVE MYSELF campaign and the UN ‘Speak Yourself’ speech, BTS has mobilized millions of fans across the world (named ARMY), topped prominent music charts, performed multiple sold-out stadium shows across the world and has been named as one of TIME 100: The Most Influential People of 2019. The act has been nominated for Best Pop Duo/Group Performance for the 63rd Grammy Awards and recognized with numerous prestigious awards like the Billboard Music Awards, American Music Awards and MTV Video Music Awards.